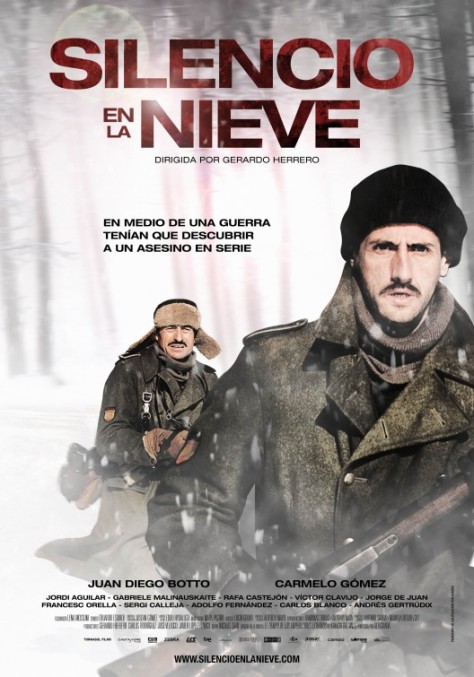 Set on the Russian front in 1943, this thriller shows a lesser known aspect of WWII, namely Spain’s participation on the Russian front. I may not be the history buff I should be to write a blog like this, so, in all honesty, I have to admit, I had no clue the Spanish were fighting on the Russian front alongside the Germans. The Blue Division or División Azul  (also called División Española de voluntarios, meaning Division of volunteers) was a division of Spanish volunteers, the 250th Division of the German army. Franco had allowed these volunteers to join up. Most of these men were right-wing, falangists, only a very few were communists.

I knew this was a thriller, therefore I didn’t expect to see all that much about the war as such. The 250th Division must have seen some heavy fighting, but we only get a taste of it. Nevertheless I liked this film a great deal. It works as a gripping thriller, but it also conveys a feeling for what it must have been like for the Spanish to fight with the Germans. There was a lot of hostility, and the Germans made them feel their superiority constantly.

The story starts with a chilling image. A frozen lake full of dead horses. When the soldiers of the Spanish division approach they find a dead man among these horses. His throat has been cut and an inscription has been carved into his skin “God Sees Everything”. The Spanish commander appoints a former police officer, Andrade, to investigate the case.

Arturo Andrade goes about this investigation with great care. At first it looks las if the victim was a pro-Soviet agent, later when there are further murders a possible lead points towards freemasons.

There is a longer sequence towards the end of the movie which is reminiscent of the Deer Hunter Russian Roulette scene, only this one here is even more chilling. I wonder if this is truth or fiction. Did they really play Russian Roulette to the extent it’s shown here?

I liked the mood and the atmosphere of this beautifully filmed movie. It has a lot of great scenes. I enjoyed the characters and the story as well and I’m glad it made me aware of the Spanish participation in WWII. I think this is fascinating material and well-worth a “proper” war movie. I’m afraid though that not many Spanish film makers would want to portray the División Azul. After all they were falangists and, as it seems, quite heroic. Depicting their heroism could be interpreted as pro-Franco, I guess.

The movie is based on a novely by Ignacio del Valle.

I found the Spanish trailer but none with subtitles and another trailer below in which nobody talks.