It’s been such a long time since the last war movie film quiz. A year? Almost. At the time I had discovered the Parents Content Advisory Guide on IMDb which I still find hilarious.

Below you can read the Parents Content Advisory Guide of a very famous war movie. Can you guess which one it is? (Just in case – the picture is taken from The Fallen and not from the movie we are looking for.)

A short scene involves soldiers being given a talk on how to avoid sexual disease while off duty. The dialogue is not particularly explicit, making reference to ‘horizontal refreshment’. A diagram of a male sexual organ is shown very briefly (intended for humorous effect).

Off duty soldiers in a bar look at black & white images of female nudity – seen only very briefly. The same soldiers then visit a brothel; it is implied that they will have sexual intercourse (none is shown). One character questions the morality of their actions.

A number of soldiers are seen (from behind) running naked into the sea; underwater scenes show the soldiers swimming naked in murky waters while being bombarded with shrapnel.

There are a number of battle scenes towards the end of the film. A large number of soldiers are killed or wounded, although this is not shown in a graphic way. There is little by way of explicit gore; a number of relatively minor flesh wounds are shown with a little blood visible at times.

There is some mild swearing during the course of the film but not a great deal; bad language is generally kept to a minimum. There are no ‘f’ words.

There are several scenes involving the drinking of alcohol. A number of soldiers smoke cigarettes in the trenches.

Some scenes of trench warfare are tense and emotionally charged.

Did you get it? No? Here is the solution.

It has been a while since I posted the last Movie Quotes Quiz and as far as I remember I haven’t done a WWII one. I did one on Holocaust movies, but not on combat ones.

[the troop stops before a memorial]
“Would you look at how fast they put the names of all our guys who got killed? ”
“ That’s a World War One memorial.”
“But the name’s are the same.”
“They always are.”

[voice over]” We were a family. How’d it break up and come apart, so that now we’re turned against each other? Each standing in the other’s light. How’d we lose that good that was given us? Let it slip away. Scattered it, careless. What’s keepin’ us from reaching out, touching the glory?”

“What will we do when we have lost the war?”
“Prepare for the next one.”

“Did you hear what Tom did this morning?”
“No.”
“He went to see old Nickelby, and asked him if they gave out compassionate leave if there’s been a death in the family. So Nickelby said, “Oh, yeah, yeah, depending on the circumstances.” And Tom said, “Well, there hasn’t been a death in my family yet, but there’s going to be one very soon, and I request leave to go home and console my parents.””

“I got a bad feeling about this one.”
“When was the last time you felt good about anything?”

“You were an accountant in Montreal?”
“Yes, sir. Uh, not really an accountant, sir. That is, I didn’t have my charter.”
“Exactly what did you do?”
“Well, sir, I just checked columns and columns of figures which three or four people had checked before me, and then there were other people who checked them after I had checked them.”
“Sounds a frightful bore.”
“ Sir, it was a frightful bore.”

I only recently saw that there was a parents guide to almost every movie describing in different paragraphs how explicit/graphic etc. a movie is and if or if not it can be watched with children. I read some of them and found many quite hilarious. Some movies come across in such an odd way seen like this…

I didn’t want to simply give you an example. Instead, let’s test your knowledge. Below you see the parents guide of a famous war movie. Guess which one it is.

There is reference to soldiers raping/attempting to rape some villagers

A man talks about how he loves pussy

In one scene, in the background, you can see a poster of a fully nude woman.

A man holds a small statue of a nude woman.

As this is a war film, there is graphic war violence throughout the picture.

Examples are a man is shot in the lungs and has trouble breathing while oozing blood. A man is piecing his internals back in. Many men are shot and killed, wounded, and screaming. A brief scene of taking wounded men back to an Aid zone, though it is a short scene there are many sitings of wounded men, dead mutilated bodies, and medics covered in blood. A scene of torturing a Vietnamese soldier ends in much blood shed (brains are implied but not seen).

A rape scene which is quickly ended by interruption.

The most disturbing scene is where the troops raid a village: a man with a mental illness gets beaten to death with the back of a gun and then they continue to shoot his distraught mother. Several adults and children get blown up with grenades (very graphic). A man shoots a woman in front of her son and grandaughter. He then put a gun to the head of the grandaughter, to torture the woman’s son. He nearly shoots the girl before his is interrupted.

Contains frequent strong language, including blasphemy, the ‘f’ word, and many uses of sh*t, a**, b*tch, and 1 use of the ‘n’ slur.

Alcohol, cigarette smoking and marijuana smoking are all depicted. It is implied that doing “shit” will wear you away from your worries.

a scene in which a Vietnamese villager is being tortured by soldiers, especially the conclusion, may be very disturbing to many viewers

one theme of the film is that of some of the soldiers who have been there for as short as two weeks going insane with bloodlust and mental visions. this may be disturbing to many viewers

Here is your solution 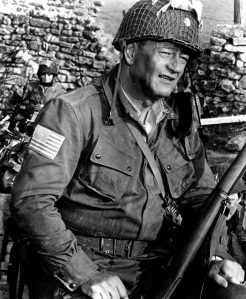 It´s been a while since I posted the last quiz and even longer since I posted the last movie pictures quiz. I am afraid it is not a very difficult one since many of the movies I chose are very well known. That´s why I won´t make a list of all the titles. Just the picture and the solution below. Have fun and don´t cheat. And, yes, the picture above is taken from The Longest Day and is not part of the quiz. 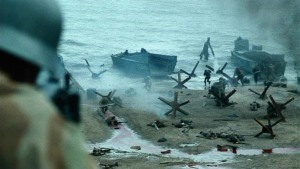 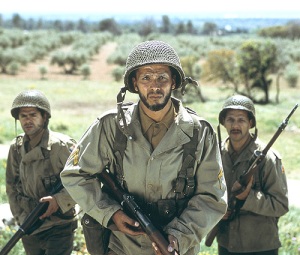 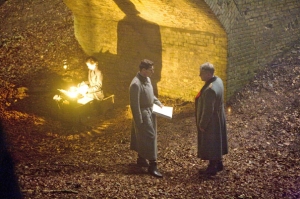 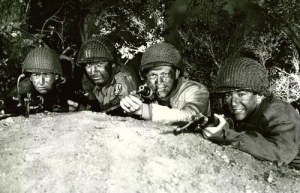 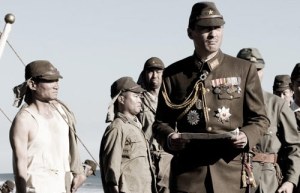 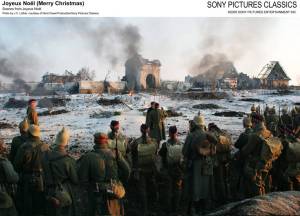 Today´s movie quotes quiz will lead us into the realm of  WWI movies.

The quote is followed by the solution underneath but first comes the random list for you. Anyone who wants a real challenge, skips this list!

Merry Christmas aka Joyeux Noel, The Lighthorsemen, The Blue Max,  All Quiet on the Western Front, Regeneration, Gallipoli, Flyboys

[wondering why Cassidy is offering a pistol] “What’s this for?”
“Plane catches fire you got three choices: You can burn with it all the way to the ground; You can jump several thousand feet; or you can take the quick and painless way out.”
[Handing gun to Beagle]
“Good luck, gentlemen.”

“Everyone to their posts!”
[a moment of indecision] “Every man to his post!”
“Quickly!”
[the Scottish soldiers get in position along the trench wall]
[Someone in the German trench stands up and walks into No Man’s Land]” No, stay here! What’re you doing? Come back!”
“Well, what the hell are you doing! Shoot the bloody Kraut!”
[the Scottish soldiers look at each other; they don’t fire]
“What are you waiting for? Shoot him, God damn it! Holidays are over!”
[the soldiers shoot in the air to warn the man in No Man’s Land, who begins to run toward the French trench]
“What the hell do you think you’re playing at? Shoot him!”
[Again the soldiers look at each other, shake their heads, and don’t fire]
“Shoot him!”
[Jonathan shoots the man, who falls midway between the French and German trenches]
“Stand down from your posts.”
[They do]
“Shame on you, Gordon. Shame on you.”
[Ponchel’s alarm clock rings in No Man’s Land. Gordon looks out to see Lieutenant Audebert running to help the man Jonathan shot – Ponchel in a German uniform]
“Be silly to die disguised as a German, eh?”
“What the devil were you doing?”
“I had a German help me. I saw my mother. We drank a coffee, just like before… You have a son.”
[Lieutenant Audebert can no longer keep from crying]
“His name is Henri.”
[Ponchel dies, and Lieutenant Audebert sobs even harder. Gordon and the Major look on from their trench, Gordon grave, the Major baffled]

“Ah, the French certainly deserve to be punished for starting this war.”
“Everybody says it’s somebody else.”
“Well. how do they start a war?”
“Well, one country offends another.”
“How could one country offend another?”
“You mean there’s a mountain over in Germany gets mad at a field over in France?”
[Everyone laughs]
“Well, stupid, one people offends another.”
“Oh, well, if that’s it, I shouldn’t be here at all. I don’t feel offended.”
“It don’t apply to tramps like you.”
“Good. Then I could be goin’ home right away.”
“Ah, you just try it.”
“Yeah. You wanna get shot?”
“The kaiser and me…”
[the others laugh]
“Me and the kaiser felt just alike about this war. We didn’t either of us want any war, so I’m going home. He’s there already.”
“Somebody must have wanted it. Maybe it was the English. No, I don’t want to shoot any Englishman. I never saw one ’til I came up here. And I suppose most of them never saw a German ’til *they* came up here. No, I’m sure *they* weren’t asked about it.”
“No.”
“Well, it must be doing somebody some good.”
“Not me and the kaiser.”
“I think maybe the kaiser wanted a war.”
“You leave us out of this!”
“I don’t see that. The kaiser’s *got* everything he needs.”
“Well, he never had a war before. Every full-grown emperor needs one war to make him famous. Why, that’s history.”
“Yeah, generals, too. They need war.”

“By the way, Stachel… there’s an impression around that… you care more about your unconfirmed kill than you do about Fabian’s death.”
[long pause]
“Perhaps it’s force of habit. In the trenches, we couldn’t even bury the dead; there were too many of them. I’ve never had the time… to discuss them over a glass of champagne.”