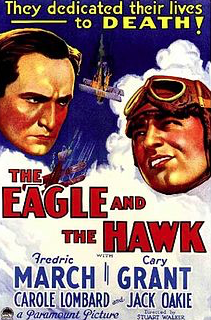 I’d never heard of  The Eagle and the Hawk before seeing it included in a war movie collection box that I ordered from the US. I’m happy to say that it was a real surprise. At one hour and eight minutes, it’s rather on the short side but it still packs a punch. Fredric March (The Best Years of Our Lives, A Star is Born) and Cary Grant (North by Northwest, Notorious, To Catch a Thief)  star in this unjustly overlooked black and white WWI anti-war, air combat drama. And there’s even a short scene with the stunning Carole Lombard (To Be or Not to Be, Mr and Mrs Smith)

Jerry Young (Frederic March) and Henry Crocker (Cary Grant) are both pilots but while Young is talented and careful, Crocker is rather foolhardy. That’s why, when they are called to got to France, Young makes sure, Crocker isn’t summoned. One can understand why because not only is he not the best pilot, but he’s also cranky and mean-spirited.

Once in Europe, Young’s quickly covered in medals. While many pilots envy him for that, he’s getting more and more depressed. Not only is he shocked to lose all of his young observers after only a few missions, but he also hates to shoot down enemy planes.

He’s more than a little surprised when he discovers that his newest observer, who has just come over from the US, is no other than Crocker. They didn’t like each other in the US but now this dislike turns into hate. Especially since Crocker treats killing like a sport, while Young’s sinking deeper and deeper into his depression. The true conflict however stems from Crocker’s attitude towards the enemy. Even in war, there are some rules, but he just doesn’t stick to them and does a few atrocious things.

When Young shoots down Alfred Voss, one of the most highly decorated German pilots, he earns everyone’s respect but cannot forgive himself for killing a mere boy.

Seeing a decorated pilot suffer from his own victories, isn’t something I’ve seen often in war movies but it’s not entirely new. What was different though, was Cary Grant’s character’s development. I thought this was genuinely well done and led to a surprising end twist that I’m not going to forget soon.

I’ve seen people comment on the scene with Carole Lombard, calling it superfluous. In my opinion, it gives the movie a bitter-sweet quality and foreshadows tragic events.

Unfortunately, I couldn’t find a trailer, which isn’t surprising as it’s a movie from the 30s.