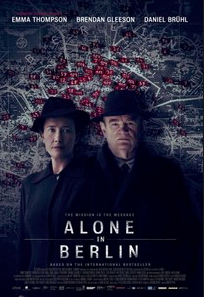 Alone in Berlin is a UK/German/Frenvh co-production based on the novel Everyone Dies Alone by Hans Fallada. The recent English publication of Fallada’s novel was so successful that it’s not surprising it was made into a movie although there are already three German versions.

Alone in Berlin tells the story of Anna and Otto Quangel (Emma Thompson and Brendan Gleeson) who lost their son in 1940 in France. This loss shakes the couple. They are disgusted with the Nazy government and decide to fight it. They begin to write subversive postcards, leaving them all over Berlin. The postcards are meant to wake up the Germans in the hope that they too will start to resist. Unfortunately, almost all of the postcards are brought to the Gestapo offices.

A police detective, Escherich (Daniel Brühl), has been assigned to hunt them. When the wrong man is arrested and executed, Escherich starts to have his own doubts about the government.

Even though the movie is based on a true story, I’m not going to say more since many readers of this blog might not be familiar with it.

While I haven’t seen any of the older versions, I’m pretty sure, that they are all better than this terrible film. I haven’t read Fallada’s novel but I’ve read other books by him and he’s an amazing writer.  I’m pretty sure, this novel is amazing too, so why was this such an awful movie?

First, there’s my pet peeve – the language. It would have been so easy to cast German actors and film this in German, but no, they had to cast Emma Thompson and Brendan Gleeson and let them speak English with German accents. Awful, awful, awful. And ludicrous. Why could they not just speak plain English? After about half an hour I had to switch to the dubbed German version. I can tell you – when I prefer the dubbed version  of a film, then there’s something very wrong.

That alone would have been enough for me not to like this film, but it’s also terrible for other reasons. While Hollywood has been known to dramatize the crap out of some minor historical event, this version robbed it of any of its dramatic potential. Watching an ad for washing powder is more suspenseful than this movie. The only story line that was mildly captivating was the transformation of the detective.

Although I think Emma Thompson and Brendan Gleeson are both outstanding actors, one wouldn’t guess, watching this. Maybe they were told that, on top of the fake accents, they had to keep all the emotions out of their faces. Daniel Brühl isn’t doing a bad job, but he too wasn’t allowed to show his potential.

What a missed opportunity. Was there anything good about this, you may wonder? Actually, yes, and that makes it even more infuriating. It’s beautifully shot. Really appealing.