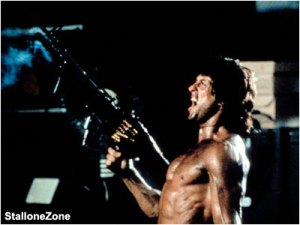 I have gotten many negative reactions when I have told people that I am interested in war movies. There are many people who think a war movie will always glorify violence and favour supermacho heroes that are close to brainless machines using guns for fun and sport.

I was always reluctant to watch Rambo until I finally gave in. I don´t think that First Blood Part I is that bad. The depiction of a Vietnam vet with post-traumatic stress syndrome is quite OK. However, I don´t like Stallone. His facial expressions are far too limited.

But when it comes to First Blood Part II… That is another story. I truly believe that this movie damaged the reputation of the whole genre.

“Do we get to win this time…?” Now seriously… Do you not consider this to be totally tasteless?

Here is what the journalist James Mottram has to add:

If the original film suggests men like Rambo are still fighting the war back home, be it on the inside or in a mountain-town, its sequel took far greater liberties. By the early 1980s, after the dust had settled on grandiose epics like Apocalypse Now and The Deer Hunter, Hollywood saw the opportunity to rewrite the history of the Vietnam War. A film so guilty of this it should be court-martialled, Rambo: First Blood Part II recast its embittered lead –  jailed in a civilian maximum-security prison between the first two films – as a one-man wager of war. A pure “fighting machine”, as his mentor and father-figure Col. Sam Trautman (Richard Crenna) dubs him, he is a nostalgic reflection of what Philip Caputo, in his 1977 book A Rumor of War , called “that savage, heroic time… before America became a land of salesmen and shopping-centres. (James Mottram in Under Fire: A Century of War Movies, p. 155)

What do you think? Did Rambo: First Blood Part II not have its part in killing the reputation of war movies?

6 thoughts on “How to Kill the Reputation of a Genre or Rambo: First Blood Part II”