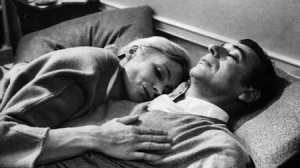 It’s been a while since I posted the last request like this. Since we have managed to find movies before, I thought it’s worth a try.

The person who wrote me this e-mail has seen this movie as a boy on TV. Some 35 – 40 years ago. It was a black and white movie, very probably British (maybe French). The main characters name could have been something like Oresti.

The film was black and white and I can’t tell you whether it was set in WWI or WWII, but I am fairly sure it was about the Belgian Resistance.
A male member of the resistance is being pursued by the Germans and hides on the balcony of a young female who he persuades to help him.
At some point, we see the young lady with a fortune teller who is predicting her getting married.
This is a dramatic scene because the psychic becomes agitated when trying to tell her about the wedding because she sees something disturbing. She sees a wedding dress which is scarlet, or red. She then becomes too upset to continue.

The young lady falls in love with the resistance guy and joins their work.
On the day of their wedding, the church is sprayed with bullets and her beautiful white wedding dress becomes covered in blood – the scarlet dress of the psychics predictions.

They are sent on a mission, separately, but the mission of the male is a rather cruel but necessary one.
Unknown to him, he is given misinformation about a military operation and then sent into the field with the deliberate intention of being caught, tortured and revealing the wrong info.
However, he was much tougher than they had anticipated and didn’t reveal anything under torture.
He escapes.
His wife finds out about his mission and goes to find him.
She is captured and sentence to death by firing squad.
Her husband rescues her at the last moment, the whole firing squad being resistance fighters, and he dressed as a German officer.

After he rescues her, he lifts her in his arms and they celebrate.
Unfortunately, some snipers, hiding in bushes, see them.
Because he is still wearing German uniform, they believe him to be the enemy and shoot them both as they are embracing. The tumble and fall of the steps of what looks like a disused amphitheatre.
They manage to hold hands as they die.

This is one of the most detailed descriptions I have received so far and I’m pretty sure, if someone has seen it, he/she will remember even if some things might have been different.

Any ideas and suggestions are very welcome.