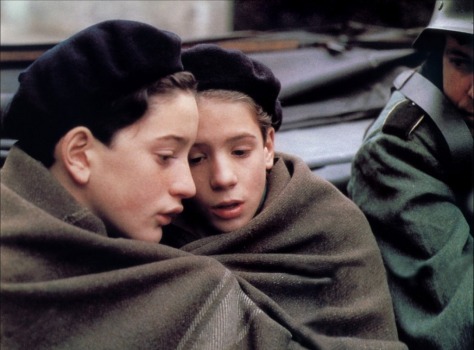 It’s been a while since the last We Are Looking For a Movie post. I had some requests via e-mail and was lucky to be able to say which movie it was but in this case I draw a blank.

Years ago I watched a movie about a young Jewish boy whose mother (who had married a Jew against her father’s will) brought him to live with his grandfather to save him. She did not stay, herself.  The grandfather was either Italian or French. I think it was a foreign film with subtitles.

The emerging relationship was so touching. One significant scene I hope will help in identifying the movie is when the grandfather admonished the boy never to let anyone see him naked because of his circumcision.

I would love to view this movie again, but I don’t know the title. It has to be fairly old. Can anyone there help me to identify this movie?

The picture above is taken from Au revoir les enfants. While that is an excellent film, it is not the film we are looking for.

Italian movies on WWII are rare, so when I saw El Alamein – The Line of Fire aka  El Alamein La linea del fuoco in a DVD shop I had to buy it right away. Thankfully it was well worth buying as I will certainly watch it again. Sure, the year is still young but I think it’s safe to say that this one will be on my Best of 2013 List. I liked it a great deal.

El Alamein is told from the point of view of philosophy student Serra. Serra has volunteered in 1942 after hearing that the Italian troops were in urgent need of reinforcements. Following the point of view of a young, naive and inexperienced private is common in war movies but in this case it works particularly well as Serra is the philosophical, introspective type. Seeing through his eyes gives the movie a lyrical feel that is underlined through a beautiful score.

Serra expects to see action right away but the Pavia Division, located on the southern line in Egypt, is more like an outpost. Boredom, inertia, heat, hunger, thirst and endless days of waiting for an enemy they cannot see but who bombards them frequently is the daily fare. This allows the men, to get to know each other, to experience the desert fully; its harsh beauty and the dangers it brings.

When they go on reconnaissance they have to fear for their lives as the terrain around the outpost is covered in mines and walking about is dangerous.

The situation is also very absurd. What are they doing there? What are they guarding? Nothing much is happening. I felt reminded of Dino Buzzati’s excellent novel The Tartar Steppe (Il deserto dei tartari).

When the British finally attack, the Italians do not stand a chance. There are twice as many British troops, they are better equipped, better fed, their morale is much higher. The Italians are demoralized for many reasons. The Germans don’t take their ally seriously, they let them do the dirty work. As it was so often the case, the high command of the Italain’s proves to be clueless. In one scene it is shown that while there is no food or water, truckloads of shoe creme are sent through the desert for a parade.

After the attack during which almost the whole of the Pavia and other Divisions died, the troops flee in confusion, not knowing where to go and what will happen next. Serra, Sgt Rizzo and Lt Fiori end up on their own and try to get through the desert with hardly any food or water.

While the first half of this movie is very quiet and takes a lot of time to give us a feel for the situation the Italians faced and to introduce the characters, the second half is action driven.

The funny thing is that while watching this, you soon forget that the Italians were fighting on the wrong side. The characters are so likable and they seem such helpless victims of their government that you can only feel pity.

I liked the many intimate moments, the discussions between the soldiers, the mood, the atmosphere. At times the movie felt like a combination of All Quite on the Western Front and Ice Cold in Alex.

I highly recommend this wonderful movie to anyone interested in war movies and WWII.

I couldn’t find a trailer, let alone with English subtitles, but here’s the full movie – in Italian.