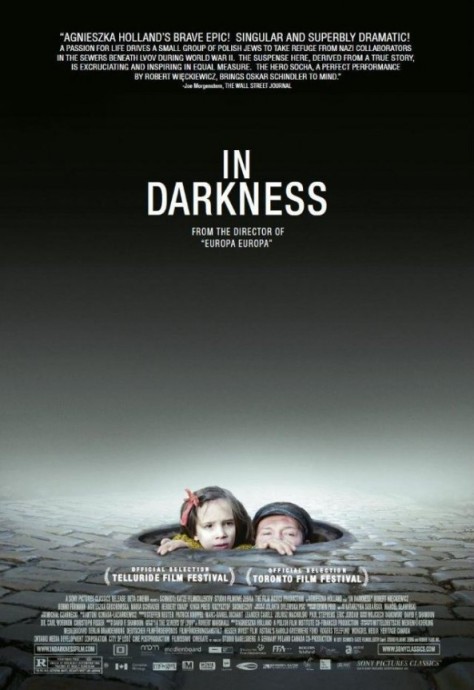 Agnieszka Holland’s movie In Darkness is a Polish/German/Canandian co-production based on a true story.

Leopold Socha (Robert Wieckiewicz) is a sewer worker and petty thief, living in Lvov, a Nazi occupied city in Poland.  One day he meets a group of Jews trying to escape the liquidation of the ghetto. After lengthy discussions he agrees to help them hide in the labyrinthine sewers under the city. Many of the Jews do not trust him, knowing well that the Nazis’ pay money for every Jew and that many Poles don’t like Jews either. Socha is rather poor and he and his family are struggling. Helping is not an act of altruism but a great opportunity to make money, as one of the Jews is very rich.

While Socha does a great job at providing them with food and helping them to change hiding places, when one gets too dangerous, he has not feelings or compassion for them at first. But over the months – the small group has to stay in hiding for 14 months – he gets to know them and admires their courage and determination. At the end, although they have run out of money, he still helps them, and risks his life and the lives of his wife and daughter.

In Darkness is a very moving film, based on an amazing story of resilience and courage. Staying in the dark and the stink, surrounded by rats, in close quarters, is very hard to imagine. Not all of those who are in the sewers in the beginning make it until the end. Quite a few, escape, some prefer to be sent to a camp.

When everything goes fine, the situation is bearable but hunger, illness, boredom and one woman’s pregnancy turn it into a nightmare at times.

On my DVD is a documentary called In Light, in which the film director Agnieszka Holland and Krystyna Chiger, one of the children who spent 14 months in the sewer, talk together about the film. When  Agnieszka Holland started filming, they had no idea that here still was a survivor although Krystyna Chiger had published her memoir The Girl in the Green Sweater shortly before that. A streak of luck brought them together. It was great to hear Krystyna’s impressions of the film. According to her, the movie manages to show exactly how it was. Everything, down to the smallest detail is correct.

Leopold Socha was one of many Poles who risked everything to hide Jews. It’s important to tell these stories as well.

There were quite a few well-known German actors among the cast – Benno Fürmann, Maria Schrader and Herbert Knaup – who were all good, but none of them surpassed Robert Wieckiewicz in the role of  Leopold Socha.

In Darkness is an excellent movie based on a true story that had to be told. Highly recommended.