I don’t think there are many movies as hard to watch as Alain Resnais’ famous testimony Night and Fog. It’s a testimony to one of the darkest chapters in human history. The film is only 30 minutes long and combines actual footage with a documentary part on the concentration camps in 1955.

I have to admit that this movie made me physically sick. I could literally not stomach it.

The camera takes us to a concentration camp in 1955. This is pretty much what they still look like today. I think most of them have been preserved the way they were and can be visited. The camera approaches the camp and a monotonous voice that almost sounds as if reading a poem tells us what we see and meditates about the fact that this all looks so normal, that all the names like Dachau, Buchenwald, Auschwitz, Treblinka were once just names and spots on a map.

From those initial pictures the movie switches to actual footage and we see first the trains, then the arrival in the camps, the conditions of the barracks, the hospitals where they performed horrible vivisections, the showers, the furnace, the piles of bodies.

The combination of the voice, the back and forth between the images of today and the actual footage showing those emaciated faces, the grimaces of those who died in pain, the huge mountains of hair and shoes and skin… It’s hard to bear.

I think this is one of the most important films on the extermination camps there is.

Most of it can be watched on YouTube but it would be better to watch it in one go to get the full impact.

I had to watch all of it. I think those masses who endured all this deserved it. Who am I to complain about an upset stomach? After turning it off I was back in my own cozy life, while they had really been there…

Most important of all, a movie like this, that bears testimony to an atrocity, helps us to not forget and to never ever let it happen again.

Please also have a look at this great resource The H.E.A.R.T Holocaust Research Project.

La vita è bella is a very unusual movie that you will hardly ever forget should you watch it. It is touching, at times funny, tragic and sentimental. It shows one man’s attempt to protect his child from the horrors of the concentration camp and how he fails in the end. It is one of the movies on my Children in War Movies List.

Roberto Benigni, the Italian main actor, writer  and director of La vita è bella is mainly known as a comedian. People were quite surprised when they heard he had done a movie on the Holocaust. I remember that I had mixed feelings but was really surprised how well this combination works. Other critics however felt offended as they stated it was in poor taste to attempt to combine a comedy with the topic of the Holocaust. But the comedy pretty much stops when the war begins. The movie has really two parts that are strikingly different which was obviously wanted. The beautiful before and the horrible after.

The Jewish man Guido Orefice (Roberto Benigni) is not a good-looking guy. He is not even very intelligent. He is clumsy and silly but also very funny and charming and has an eye for poetical and beautiful things. This is how he wins the heart of the attractive Dora even though she is already engaged to a future fascist leader.

The second part starts a few years after their marriage. They have a little boy named Guisoué. Anti-Jewish laws have been implemented in Italy and Guido tries to hide their meaning from his son by turning them into a game. When they know they will be deported, Dora, even though she is not Jewish, accompanies them to the concentration camp. Once arrived Guido pretends that this is all a game, some sort of summer camp for children and grown-ups alike. He makes his son believe that they have to follow all the orders strictly if they want to win.

I must admit that I did not totally approve of Benigni’s approach, but it is not a movie that is easily forgotten. And it is thought-provoking and will give ample material for discussion of various questions. Are we allowed to tell the Holocaust through comedy? Should a movie about the Holocaust be this sentimental? Wouldn’t it be better to tell it in a more sober manner? La vita è bella is also problematic when it comes to the historical facts. Children were not kept alive in the camps. Still the first part is a touching and funny story of an impossible courtship while the second is the story of a fathers attempt at keeping the horror at bay.

Did you see it? Did it work for you? And if you haven’t, would you want to watch it? Do you mind a Holocaust comedy? 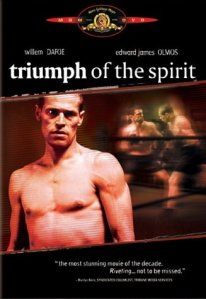 Salamo Arouch, a young Greek of Jewish descent became middle weight boxing champion of the Balkans in 1939. All his 24 fights ended with a KO. An absolute record. Surely he would have had a stunning career. Instead after Germany invaded Greece he and his family were deported to Auschwitz-Birkenau together with thousands of other Greek Jews in March 1943.

While the women of the family were gassed on the first day of their arrival, Salamo, his father and his brother were coerced into forced labour. Once the guards found out that he was a famous boxer they forced him to fight other prisoners for the entertainment of the Nazis. The loser would be gassed mercilessly. Somehow Arouch survived Auschwitz winning 208 fights by KO. After the liberation he emigrated to Palestine and witnessed the foundation of the state of Israel.

This incredible story, starring Willem Dafoe (at his absolute best) as Salamo Arouch is told in Triumph of the Spirit. Shot on location at Auschwitz this is one of the most impressive movies on the Holocaust I have ever seen. It feels spooky to know that we are actually seeing the very  place where all this happened. Salamo Arouch came back to Auschwitz as an advisor during the shooting of this movie. He died in April 2009.

I had so many questions while watching this… So many thoughts… What was it like to go back there after having endured all this? What was it like for the actors to play in such a movie in such a place that was saturated in pain? Can you still feel this? And what was it like to play a prisoner of Auschwitz? I think this must be one of the hardest roles for any actor. I was also wondering if this movie would not be good material to teach Auschwitz and the theme of the concentration camps in schools. And I was wondering, once more, how all this could have happened. When you see the guards, hit the prisoners, see how malnourished they are, so hungry that they would almost kill their own for a tiny piece of bread. The way they had to sleep with such little space. When you watch how thousands are forced to take showers but were ultimately gassed. When you see the piles of clothes, shoes, hair, jewelry… and the piles of bodies that had to be cremated. How could anyone help in any of this? How could that happen? I think we need to have such movies, we need to know what humans are capable of, and stay alert and never let this happen again.

Another question I was asking myself was: Would I like to visit Auschwitz? I must admit, I wouldn´t. I believe that places can store pain. I would not want to get this close to it. What about you? Would you want to visit Auschwitz?