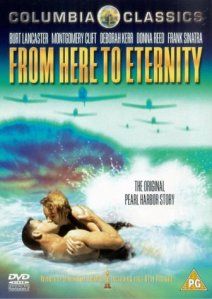 Any nation´s traumatic experiences have led to numerous attempts to capture the event in a movie. Pearl Harbor is no exception. There are a great many Pearl Harbor movies. Some are very well-known, others hardly at all. Some are very good, others rather not.

I would like to present four of those I have seen. Three of them are also romances, one is a pure war movie. Each and every one of them might very well get an extensive review in the future, but here, as teasers, four short glimpses at four special movies.

The one that generally everybody will immediately think of is the Jerry Bruckheimer production Pearl Harbor (2001) . The main theme is the love story of two men (Ben Affleck and Josh Hartnett) with the same woman (Kate Beckinsale), a nurse. They are both fighter pilots and at the time when Pearl Harbor is attacked, they are stationed there. The movie starts slightly before the attack and ends shortly afterwards. It doesn’t try to show the other side. The Japanese are just plain bad. Period. As corny as this movie may be (although I think it works as a romance), it still shows an impressive re-enactment of the attack. For that and for a few exciting aviation scenes it is worth watching. 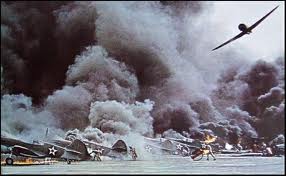 Tora! Tora! Tora! (1970) is really different. This US/Japanese co production is an incredible attempt at showing both sides. And it does manage to do so. The Japanese are shown in all their tragic complexity and their fear, as Admiral Yamamoto states, that all they have done is to “awaken a sleeping giant and fill him with a terrible resolve”,  is quite moving. This is the best movie if you really want to get a feel for what was happening and why the involved parties acted and reacted like they did. It is filmed as well in  English as in Japanese which heightens the authenticity. A must-see. An eye-opener. A truly good movie.

Of course there had to be a Pearl Harbor movie with John Wayne in it. Otto Preminger´s In Harm´s Way (1963) starts just shortly before the attack, shows it from the perspective of a naval ship and later follows the main characters into battle in the Pacific. It is one of those black and white all-star casts that really works (Kirk Douglas, Henry Fonda, Patricia Neal, Dana Andrews). The acting is superb. Pictures are nice, the background story, also a love story, is convincing, and the score is very good. An enjoyable watch. Not very heavy on history but still a good movie and a fine example of a film dedicated to this disastrous event.

Don´t we all know this picture? It is one of the most famous movie stills ever. From Here to Eternity (1953) is a movie I totally love. It is my favourite of the four, even though I must admit Tora! Tora! Tora! is way more informative. The story that is based on the novel of James Jones is  intense and dramatic.  The acting is fabulous. Go and try to find this nowadays.  From Here to Eternity is also an all-star cast, with Burt Lancaster, Montgomery Clift, Frank Sinatra, Deborah Kerr and Donna Reed. This movie is one of the very great classics, right up there with Casablanca. Yes, that’s what I think. A movie to watch and re-watch. It has won multiple Oscars. You can see Monty in one of his best roles ever. Pearl Harbor is not the movie´s main theme but it does end with the attack on Pearl Harbor. It tells the stories and love stories  of different army soldiers on the eve of the attack  and somehow seems to juxtapose the tales of the people, their sorrows and woes with this national catastrophe.

One thing is for sure, pick any of them and you will not regret it. Even Pearl Harbor is at least good  old escapist entertainment.