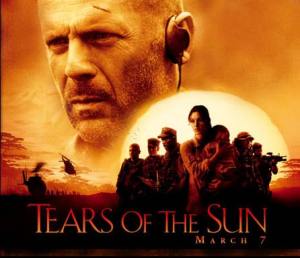 Tears of the Sun shows a Navy Seal Commander Lieutenant Waters (Bruce Willis) struggle with his conscience. During the outbreak of a war in Nigeria he is sent to rescue an American doctor (Monica Belucci). However the doctor refuses to leave without the villagers who are surely killed if no one cares to bring them to a refugee camp. The question is now, will the callous, hardened Lt help those civilians or will he merely follow orders? His conversion towards an emphatic being is not completely convincing but that is not the main problem.

The action, fighting, emotions are very intense and in so far it is good entertainment for action buffs. My problem starts when this is called a war movie. We should only call a movie a war movie when the action is based on a known conflict. The war that we  are shown in Tears of the Sun did not take place, it is purely fictitious. Furthermore why invent a war? I think this is highly questionable. And why invent a Nigerian war? One film critic, A.O. Scott, even stated that Nigeria was a bad choice since it had been spared such a civil war unlike other surrounding countries. Don´t get me wrong, Scott does not defend this movie, but he only criticised the choice of inventing a war while his misconception of the existence of a Nigerian Civil War shows the core problem. The whole story reveals how very problematic it is to invent wars when even people as well-informed as A.O Scott haven totally forgotten that Nigeria was once the place of one of the most cruel and horrible civil wars, namely the Nigerian-Biafran War. To me it seems as if in inventing such a war we erase the memory of the actual war.

But even if we have forgotten this war, we have not forgotten the pictures of the starving Biafran children.

I just would like to take the opportunity to show some respect for the people who suffered in those wars we may have forgotten. 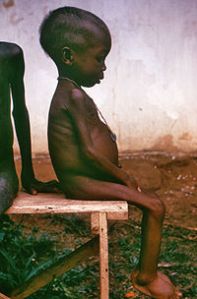 What are your thoughts? Do you think it is not problematic to invent a war?