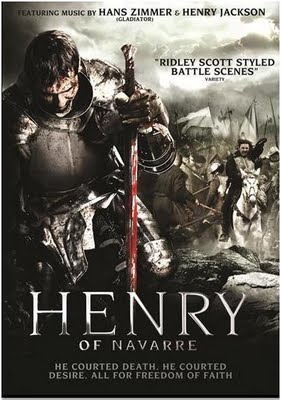 It is the mid-16th Century and France is awash with blood, as the protestant Huguenots fight for survival against dark forces led by the treacherous Catherine De Medici. When she orchestrates the ultimate betrayal at the infamous St. Bartholomew’s Day Massacre, King Henry IV will fight his life’s greatest battle to ensure her treachery does not go unanswered…

Based on the novel by Heinrich Mann, experience an epic chronicle of one man’s heroic struggle against overwhelming forces in this action-packed and spectacular “5- STAR” (Cambridge Film Festival) motion picture event with “RIDLEY SCOTT STYLED BATTLE SCENES” (Variety).

I’m really looking forward to watch this movie. This is the type of epic period drama that I love. And since I’m a sucker for great film music and love Hans Zimmer who has written the score of Henry of Navarre, there is twice as much to look forward to. Based on Heinrich Mann’s eponymous novel, starring Julien Boisselier, this international production offers large-scale cinema.

What’s even better, I am able to give away one DVD of Henry of Navarre courtesy of Showbox Media. All you have to do is leave a comment. I will draw the winners next Saturday and announce them on the following Sunday.

The giveaway is open internationally but the DVD is REGION 2 coded.

Henry of Navarre is out to buy on Blu-ray and 2 disc-DVD on 4th July 2011, courtesy of  Showbox Media Group.

The giveaway is now closed.