“The right picture can win or lose a war.”

I remember watching Clint Eastwood’s Flags of Our Fathers shortly after it was in the cinemas and feeling less than enthusiastic about it. I’d been watching my way through the best infantry combat movies at the time, so, obviously, Flags of Our Fathers fell short. After re-watching it yesterday I must say, it’s not bad at all. Quite the contrary. Sure, it has some corny Hollywood moments, but overall it’s a very interesting movie about topics that are still relevant today: the power of images and the making of heroes.

Flags of our Fathers tells the story of the iconic picture that rekindled the American war effort. Looking at the photo below I would say it’s extremely powerful. I’m not surprised it had such an effect. 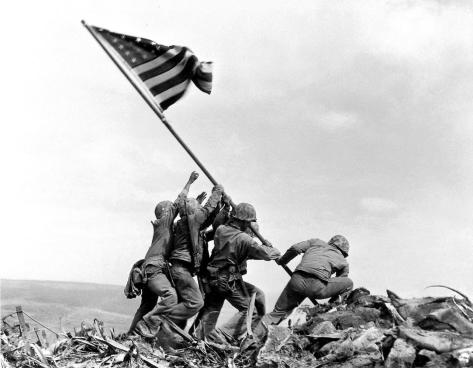 The movie starts with two elderly men reminiscing and telling their story to the son of one of them. The son knows his father took part in the battle of Iwo Jima and that he’s on the famous picture but he doesn’t know much more. His father never spoke about the war. From this initial moment the movie is composed mostly of flash back sections, some of which showing what happened on Iwo Jima, some telling about what came after the picture was shot.

Iwo Jima – or Sulfur Island – was a strategic point. Taking the hill meant that the US might after all have a chance to win the war. When the troops land, the island looks bleak, dark, forlorn and empty. It’s quite a creepy moment, which is enhanced through a change in point of view. We first see the troops land and slowly walk towards the hill, scanning the landscape and then we get the point of view of the hidden Japanese who observe the troops from their fox holes. Needless to say that this first wave of US soldiers is quickly heavily decimated. Still, many make it to the top and that’s when they plant the flag. A senior officer later demands this flag and the commanding officer decides to exchange it and to let him have another one. Both flag raisings are photographed but it’s the second, which is the better picture, that makes it into the newspapers.

Three of the men who raise the flag survive. However, inadvertently, one of the first six is named as the sixth of the second group, which will cause a lot of heartbreak.

The three survivors are sent back to the States where they are touring the country and trying to convince people to help the war effort and buy bonds.

The three men who haven’t done anything more heroic than holding a heavy pole, feel uncomfortable about being called heroes. One of them, an American Indian, is especially uncomfortable. He feels like a cheat. Not only because he doesn’t feel heroic but because they were not even part of the initial flag raising. It feels like he’s deceiving people. The mix up of the sixth soldier makes it even worse.

The movie is sleek and visually compelling. The combat scenes on the island are shot in gritty almost black and white pictures, which form a contrast to the colorful home front scenes.

The actors, notably Adam Beach and Ryan Philippe, are very good. The score is discreet and well-chosen. It stays mostly in the background.

I thought Flags of Our Fathers was really watchable. More than that actually. It’s very good. It shouldn’t be seen as a combat movie but more as a movie about the impact of pictures, an exploration of the true nature of heroism and the way society treats heroes when they aren’t needed anymore. It was sobering to see their treatment. At no point were they seen as soldiers and men but merely as a possibility for propaganda. This became even clearer after the war when people lost all interest in them.