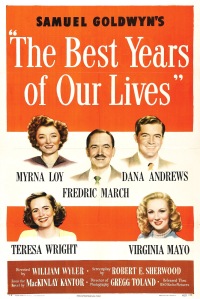 I’m actually a bit surprised that I really liked this melodramatic movie, despite the fact that the gender roles and the messages about family and marriage are cringe-worthy. While I felt it’s dated, I could still understand why this won 7 Oscars when it came out.

The Best Years of Our Lives shows three WWII veterans returning home to small-town America. The three men meet on the plane home. Homer is a young marine, Fred is an equally young airforce captain and war hero, while Al is a fortysomething Infantry Sgt. The three men go back to very different lives. Homer who has lost both arms is scared that people will react badly, especially his childhood love Wilma. Fred returns to his wife to whom he’d been married for only 20 days before going abroad. He used to work in a drugstore before the war and hopes that becuase he is a highly decorated officer now, he will find a better job. Al, the oldest of the trio, has been married for twenty years and has two grown-up children. He used to work in a prominent position in a bank and is pretty sure to return to an equally good position.

On the rather lengthy trip they share some of their fears and hopes, and before parting they decide they will meet some day at a bar that belongs to Homer’s uncle.

The three men soon find out that returning is very difficult. They have changed, society has changed and people don’t react with a lot of empathy. By the time they meet at the bar for the first time, all three of them are disillusioned about their home and, even more about themselves.

The first part of the film is really good, but then it turns too melodramatic for my taste, although I liked the love story between Fred and Al’s daughter. The movie is worthwhile for many reasons. Some of the scenes are really gopd, the acting is great and the cinematography was convincing too. Some critics found the end too corny. While I wouldn’t exactly deny that, I liked the scene set at the aircraft graveyard, which takes place towards the end. I think it is one of my favourite war movie scenes (see below).

What is worth mentioning is that Howard Russell who plays Homer had lost both of his hands in 1944. I think you can easily imagine how authentic that makes Homer.

And here’s the aircraft graveyard scene 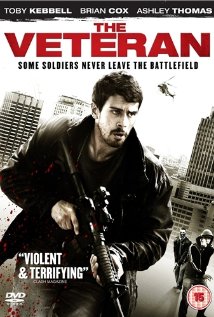 The British movie The Veteran is asking a few interesting questions but the story as such isn’t  very convincing. Too bad. It had potential.

What happens with all those young veterans coming home from wars like Afghanistan or Iraq? Their tours are finished and when they return they have to face the bitter truth that it will be hard for them to find a job and that people really don’t care about them.

Rob is just a guy like that. When he returns from Afghanistan all he finds is an ugly apartment in one of the areas of London were the less privileged live. Drug wars and gang feuds are common. Unemployment is high.

One of his comrades approaches him and tells him his brother offers them a job. The job they are offered is pretty typical for veterans. Surveillance. They are told they have to follow potential terrorists and find out if one of the informants they are using is really trustworthy.

Rob gets beaten up pretty bad during some of his missions and after a while it dawns on him that something is dodgy. Too late.

I’m not going to reveal more of the plot as it’s pretty thin. The movie is still watchable as it depicts a lot of the problems the UK are facing. Not only regarding their veterans but also regarding the many young and  unemployed people.

It’s an interesting companion movie to Harry Brown and also to the US series Homeland. The acting is pretty good but the story a bit too thin. And the message? I have no clue. That’s probably what bothered me the most.

Before I end this post I just want to let know that I will not be online during the next two weeks. I’m travelling.

I think this was the longest I haven’t posted on this blog but life – virtual and real – was beyond hectic. I also received numerous mails from people asking for the opportunity to write a guest post. I I’m a bit peculiar when it comes to guest posts. I thought I should be the one asking, not the other way around. So far I have only asked two people, nem baj, who wrote the last post on this blog, and Kevin aka The War Movie Buff whose post is pending.

Now you wonder, does this mean you are not allowed to ask whether you can do a guest post. No, it doesn’t mean that but your chances of being accepted are minimal. Especially when it is not about war movies. People have the weirdest ideas. Why the heck would I want you to write a guest post about “home schooling” on a blog dedicated to war movies? Duh.

This week I also received a request by a man who writes for the Mesothelioma Cancer Alliance. It seems that this type of cancer is very frequent in veterans. It’s a type of cancer you can develop due to exposure to asbestos and often it is only detected 20 years later. As we all know early detection is key when it comes to cancer. I can see why he asked to have a guest post on this blog. The intention is to inform veterans of the condition and I am aware that I have a lot of veterans among my readers. To be honest, my first impulse was saying “no”. Or ask him to write it in a way that relates it to war movies. That would be tricky though. When I thought about it again, I realized that I might actually want to include this type of post. But since I’m not a 100% sure, I decided to ask you.

What do you think, should this blog include information for veterans related to health issues (physical and psychological)?

And if so, in a blog post or maybe on a separate page called “Veteran’s Health”?

What the hell was that? Sorry but I did not get this movie. I was so thrilled when I heard from one of my readers about this a while back and thought that would be just the movie for me. I was always fascinated by military cemeteries. Those rows and rows of crosses. Each cross a life. Each cross a story. To dedicate a movie to those who bury the dead seemed so worthwhile. But somehow Coppola‘s Gardens of Stone doesn’t keep the promise it makes. Instead of an in-depth exploration of what it means to be the one to bury those who come back in caskets we get a little bit of everything which sums up to nothing. The acting is quite good, James Caan, Anjelica Huston and James Earl Jones do a good job but the story is too predictable. The movie starts with a funeral and then rewinds so we know already what is going to happen.

Sgt Hazard (James Caan) and Sgt Goody Nelson (James Earl Jones), two  Korea veterans and close friends, are Honour Guards at Arlington military cemetery. Hazard wants nothing more than going to Vietnam and teach the young soldiers how to survive over there. When a friend asks them to look after his son Willow who joins the unit, it seems to be Hazard’s mission to keep him from harm. As the funeral of the beginning  shows us, all his endeavors are futile.

It is exactly this predictability that finishes off this movie. And then there is the relationship of Hazard with the anti-war Washington Post correspondent Samantha. Their discussions pro or contra war are so boring. And totally without any consequences as she keeps on dating him… Of course there is also the young man who want to fight for his country and who is exemplary for so many who died doing just that.

The movie intersperses actual TV footage in order to give a bit of  “real war movie” flavor.

Apparently – I am speaking as a total layman – this movie is highly appreciated by people in the military. It is said to be very accurate and true to military life and rites.

Before I give you my final statement here is what  Jamie Russell writes:

Beautifully shot, wonderfully acted (Caan and Jones’ performances offer a truly outstanding sense of military camaraderie), Gardens of Stone remains one of the most problematic films to have come out of the war – part pro-military, part peacenik, 100% pro-American. (Vietnam War Movies, p. 46)

In my own words: It’s deadly boring hotchpotch.