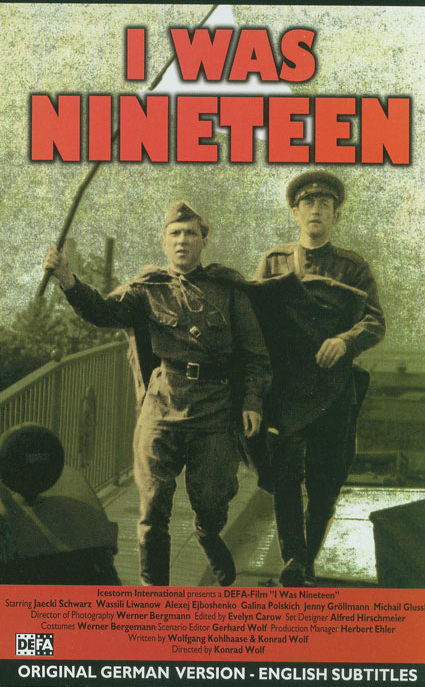 The East German movie I Was Nineteen – Ich war neunzehn is based on the film director Konrad Wolf’s war diaries. Set in April 1945, it is an episodic movie which tells the story of 19 year-old Gregor Hecker who moves with a Red Army  scouting team towards Berlin.

Hecker is of German origin, he left Germany with his parents at the age of 8 and has lived in Russia ever since. Returning to his home country is peculiar for him. He speaks fluently German and Russian but feels much closer to the Russians.

The movie shows a vast panorama of German society. People who have lost everything and despair, those who believe the war can still be won, some who are afraid of the Russians, others who threaten them. Gregor and his group try to persuade all the German soldiers and officers they meet to surrender; some follow the suggestions, some keep on fighting although the war is almost over.

As I said, the movie is episodic, more than a coherent story line we have a lot of short stories which illustrate the different reactions to the end of the war.

The Russians are also depicted in their variety, peasants and people with higher education, people from all sorts of social and ethnic backgrounds are shown.

I liked the movie, the characters are likable and the approach was interesting however I don’t think it’s a very realistic movie. Sure, it accurately depicts how estranged someone like Gregor would have felt, how different he was from the other Germans but that’s how far realism goes. What I didn’t find realistic is how peacefully they behaved. The Russians in this movie were all good-natured, mostly gentle, protective of women and children. I don’t think that was the case, there are too many horrible stories which tell otherwise.

The movie isn’t a German but an East German movie which may explain why the Russians were depicted in such a positive light.

There is only one instance in which it is shown how much they must have hated the Germans for what they had done to them. When a German woman asks Gregor whether she can sleep in the house he and his fellow soldiers have occupied a female soldier shouts at her in Russian and Gregor translates. She tells her that it serves her right to be afraid and that what the Germans did to the Russians was so horrible and painful that it deserved punishment.

Despite these reservations I’m very glad I watched this. The movie is available with English subtitles I just couldn’t find a corresponding trailer.

I have seen at least six of Edward Zwick’s movies (Glory, Legends of the Fall, Last Samurai, Blood Diamond and Defiance) and was only disappointed once when I watched Defiance. Courage Under Fire may not be the best but I still liked watching and re-watching it. For one it’s one of the very rare war movies with a female main character but it also tells a suspenseful and quite complex story. It may not be anti-war as such but manages to make us understand a few things. Last but not least I tend to watch every movie with Denzel Washington. Zwick has worked with him before, notably in Glory which is one of the most outstanding war movies you can watch.

Colonel Sterling (Denzel Washington) is asked to investigate whether chopper pilot K. Walden (Meg Ryan) who was killed in action was worthy of a medal of honour. The assignment is Sterling’s second chance, an opportunity to rehabilitate himself. Ever since he came back from Iraq where he took part in Desert Storm, he has changed. He is drinking, withdrawn and slowly unraveling. He cannot forgive himself that due to his order a friendly tank was blown up. Far less can he accept that the event is not called what it was and that he had to lie to the parents of one of the crew and tell them their son died as a hero under enemy fire.

As a first step in the investigation of officer Walden’s worthiness he questions the crew her chopper came to rescue before it was shot down. The men tell what they heard, they didn’t see a lot. Walden’s huey and her crew went down between those they came to rescue and the enemy. They took all of the fire during the night and in the early morning.  The men remember having heard a M16 until just before both parties were rescued by another chopper.

At this point in time, Sterling doesn’t know that Walden is not only a heroic soldier but that Walden is a woman and would be the first woman to ever receive a medal of honour. After having questioned the rescued crew he has to interrogate Walden’s crew members one by one. Her co-pilot is in a wheel chair, he was seriously wounded and cannot remember what happened on the ground. Ilario the medic (Matt Damon), parises Karen and her decision making but Monfriez (Lou Diamond Phillips), an angry, aggressive soldier, tells him that Walden was a coward.

The whole story is revealed layer by layer and in flash backs. We see what happened from different points of view and after a while it is clear someone is lying. It will be Sterling’s duty to find out whether she was a coward as some say or a hero deserving of the highest decoration.

The movie interweaves two stories, the investigation of Karen Walden and Sterling’s fight to come to terms with what happened in Iraq.

I liked the way the movie showed how different points of view change a story, how there may be more than one truth. Despite the fact that some of her crew lied, they still all saw different aspects of how it happened. It’s not a court-room drama but it has elements of it and is quite suspenseful.

One of the main topics however is women in the military. When Sterling hears that the medal of honour is destined for a woman we see that he has a problem. The idea is so new and strange to him that he has a hard time to absorb it at first. On the other hand, because the medal is destined for a woman, his superiors hope this is an opportunity to get as much positive media coverage as possible and would give it to her whether she deserved it or not.

The actors are good but that is to a large extent due to the characters. They are all interesting, very well-developed characters. What I liked a lot is the way the movie is structured. The changing between action- and dialogue sequences and more introspective moments. It’s a very balanced movie. The message is another story. It’s not an anti-war film. It is about people who love being in the military, who find the life as a soldier or pilot the most fascinating there is. People who put duty and honor before their family but still struggle to find a balance.

I think it’s very well done, entertaining and certainly a must for all the Denzel Washington, Meg Ryan and Matt Damon fans and those who appreciate the solid work of Edward Zwick.

Ridley Scott’s G. I. Jane is an extremely entertaining movie. I just need to enumerate who’s in it and you might be tempted to watch it if you haven’t done so yet. Demi Moore, Viggo Mortensen, James Caviezel, Anne Bancroft. The story is interesting if somewhat implausible but certainly providing us with some food for thought about different things.

Lt Jordan O’Neil (Demi Morre) is an ambitious young woman. She would like to climb the career ladder no matter what it takes. Being pretty sure this will need some combat experience she is willing to go the whole way. Only women aren’t really allowed to undergo combat training. Senator DeHaven (Anne Bancroft) is equally ambitious. Sensing that supporting the admission of women to the Army might boost her career she does everything to get permission to let a test candidate, G.I. Jane, undergo training. To make matters worse the people against her and this undertaking decide to choose the hardest possible training, namely the Navy SEAL training.

The selection of the right candidate takes some time. Senator DeHaven doesn’t want a masculine looking woman, she doesn’t want a homosexual woman either as this could undermine the exercise. When she sees as picture of beautiful Jordan O’Neil, she knows, it is her and no other that she wants for this test run.

What follows is one of those stories that show us how a resilient human being can fight even the most adverse circumstances, overcome weakness and prove her strength.

Jordan undergoes the SEAL training and where many men fail, she excels. She makes it through the initial week and the following weeks. During this time she is closely supervised, challenged and in the end also brutalized by the Master Chief (Viggo Mortensen). Of all the boot camp bastards that we get to see in this type of training focused movies he is by far one of the most complex and interesting. Not just because he quotes poetry but also because he changes considerably and ultimately because he isn’t a bad sort at all. He has to be mean. Sure, there is this one scene in which he overdoes it but doesn’t he have his reasons?

The movie shows 2/3 boot camp and 1/3 actual combat. This las part is highly fictionalized and serves mainly the purpose to show how worthy a soldier Jordan has become.

The movie is a bit on the sentimental side and – yes – it is stretching quite a few things but I like it and have watched it before. I think Demi Moore was a terrific choice and it is one of Viggo Mortensen’s best roles. Also Anne Bancroft as a real b**** is great.

Does it say much about women in the military? It certainly does look at the adversity a woman would have and does face, it looks at the prejudices and preconceptions. Jordan has to start to do it exactly like the men before she is only half accepted. It shows also that it isn’t only that men think women can’t do it but that men are constantly tested by the presence of women. Temptation as well as compassion play into it. Seeing a wounded female soldier might be harder to take than seeing a wounded man. And what If she has to rescue you and she is a slender woman while you are a big, bulky man, weighing twice as much?

My top favourite scene is when a bunch of soldiers, one of them of African-American origin, discuss if a woman should be admitted to this type of training and the African-American soldier points out that his grandfather was only allowed a s a cook during WWII. It is obvious that the prejudices African.Americans had to face were similar to those women had and have to endure.

Don’t watch it, if you are looking for answers, watch it when you want great entertainment and a probably very realistic look at the Navy SEALS training.

I am left with quite a lot of questions. Are there women today in the Navy SEALS? Is it in any way a realistic movie or not at all? Why exactly did the Master Chief mistreat her like this?