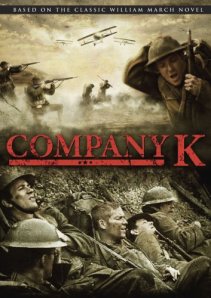 I have watched the reaction of many men to pain, hunger and death, but all I have learned is that no two men react alike, and that no one man comes through the experience unchanged. (William March)

The above quote is taken from William March´s novel Company K on which this movie is based. The book is largely autobiographical and apparently one of the most convincing anti-war statements that has ever been written. That sounds like a great premise and, boy, was I looking forward to watch this. But unfortunately great intentions don´t guarantee a good movie. If they did this would not have turned out to be one of my very worst war movie experiences. Company K is horribly bad.

As I am a sucker for great score the music was one of the first things I noticed while watching Company K. Awful music. Maybe great in a horror movie or to illustrate what it sounds like to go to the dentist. Honestly, this score drove me up every single wall of my apartment.

It is a pity as the intentions behind this sorry effort are good, and the first few minutes when we see Joseph Delaney, aka William March, the main character how he  tries to tell his story, are promising but from then on it gets worse and worse. The acting is as bad as can be and the idea to just let us catch glimpses of the men Delaney served with is exasperating.

Delaney volunteered with the Marine Corps in WWI. Soon after arriving his company is attacked near Verdun. Trench scenes, battle scenes, mustard gas attacks, all quite eloquent if it wasn´t for the acting and this mad jumping from one character to the next.

Company K is one of those movies who gets either 1 or 5 stars. Odd, right? I hated it but if anyone who liked it reads this, tell me why.

For anybody who would like to read more about it here is  Company K´s Homepage.

If you watch it and are bored out of your mind and annoyed by the pesky music… Don´t come here complaining, I warned you!