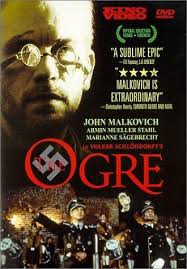 Volker Schlöndorff’s The Ogre aka Der Unhold (France/Germany/UK) is based on Michel Tournier’s novel Le Roi des Aulnes aka The Ogre. The Ogre is a highly symbolical, original and complex  movie that attempts nothing less than to explore Nazi symbolism and ideology, German culture and mythology by telling the incredible story of Abel Tiffauges, a man who loves children and animals and who makes himself believe he is more than just human. The movie is filmed in English, French and German.

Abel Tiffauge’s story has five very distinct parts. Part I. Childhood. The French boy Abel grows up in a Catholic private school for boys. He is the outsider, the odd one, the one others pick on, the one the priests punish whenever someone has done something. Especially a very fat boy exploits Abel whenever possible. But he is also his only friend. When Abel is wronged again he wishes a catastrophe upon everybody. And it happens. From now on he believes he is invincible and powerful. Part II. Grown-up. Abel is still odd and a loner but he is also an auto mechanic with a flourishing business. Abel is also an amateur photographer and likes to take pictures of kids. There is nothing he loves more than kids. This very innocent fondness is mistaken for child molesting. Instead of being sent to prison, the falsely accused is sent to war. Part III. POW. Abel is captured together with his officers and sent to a German camp, somewhere near the Polish (?) border. During the day when everybody works he sneaks off to an abandoned hut and befriends a moose. One day he meets Goering’s forester. Part IV. Goering. If Goering was anything like the Goering portrayed in this part, then he was one of the most revolting beings to have ever walked this Earth. Abel is to help on his hunting lodge and gets a close look at the way the Nazis and their friends spend their leisure time. Drinking, eating, hunting. Very vulgar. Part V. The Erlking. Abel is sent to Kaltenborn Castle an elite training camp for German boys. He is happy like never before and loves to be able to take care of these boys but he also takes an active part in their training. Soon he starts to collect the boys from the neighbourhood and the people who are afraid of him call him the ogre. He doesn’t realize that he is doing wrong. When the Russians approach and people from concentrations camps are liberated, he starts to understand what he has been part of. He tries to help a Jewish boy and almost gets killed.

So much for the content of The Ogre. But that is only one part. The movie shows us in stunning pictures what it must have been like to face Nazi ideology. The power of the imagines they created by using potent symbols is amazing. The visualization of this ideology is fantastic. Just take a look at the trailer and you see some of it. The boys standing in the form of a giant Swastika holding burning torches in the night. But then there is also the undercurrent of German culture, of everything that was good about Germany and was perverted by the Nazis. The love of the forest, love of animals, children, poetry.  Goethe’s famous ballad The Erlking is quoted and put into pictures in a very spooky way. Without knowing this poem a great part of the movie’s meaning stays hidden.

Who’s riding so late through th’ endless wild?
The father ‘t is with his infant child;
He thinks the boy ‘s well off in his arm,
He grasps him tightly, he keeps him warm.

My son, say why are you hiding your face ?
Oh father, the Erlking ‘s coming apace,
The Erlking ‘s here with his train and crown!
My son, the fog moves up and down. –

Be good, my child, come, go with me!
I know nice games, will play them with thee,
And flowers thou ‘It find near by where
I live, pretty dress my mother will give.”

Dear father, oh father, and do you not hear
What th’ Erlking whispers so close to my ear?
Be quiet, do be quiet, my son,
Through leaves the wind is rustling anon.

Do come, my darling, oh come with me!
Good care my daughters will take of thee,
My daughters will dance about thee in a ring,
Will rock thee to sleep and will prettily sing.”

Dear father, oh father, and do you not see
The Erlking’s daughters so near to me?
My son, my son, no one ‘s in our way,
The willows are looking unusually gray.

I love thee, thy beauty I covet and choose,
Be willing, my darling, or force I shall use!
“Dear father, oh father, he seizes my arm!
The Erlking, father, has done me harm.

The father shudders, he darts through the wild;
With agony fill him the groans of his child.
He reached his farm with fear and dread;
The infant son in his arms was dead.

John Malkovich as Abel Tiffauges is astonishing. I think it is one of his best roles. He is such a weird-looking actor and that is perfect for this role. I particularly like the three German actors Heino Ferch, Armin Müller-Stahl and Gottfried John. But everybody else, especially those many little boys and girls, are very convincing.

Volker Schlöndorff can look back on a career with many an important movie. He is not just any director but one of the very great. He has done the war movies The Tin Drum and The Ninth Day and the movies Swann in Love, The Handmaid’s Tale and Ulzhan.

Michael Nyman is one of my favourite composers. He is foremost famous for the scores he wrote for Peter Greenaway and Jane Campion. This one here is OK but not as outstanding as his other work like Draughtman’s contract, Gattaca and The Piano to name but a few.

For me this is a 5/5 star movie. It has incredible pictures, is dense and complex and invites you to rethink Nazi ideology and symbolism like not many others. It is better than the Boy in the Striped Pyjamas that is for sure. But not as good as Pan’s Labyrinth.

Other war movies with children as main characters can be found on my list  Children in War Movies.