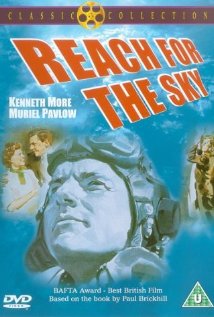 If Reach for the Sky wasn’t a true story it would be one of those movies which you’d just shrug off as way over the top but since it is based on a true story it leaves you astonished.

Reach for The Sky is the story of one man’s love for flying which was so intense that it made him  overcome one of the worst things that can happen to a man and later turned him into a legend.

Douglas Bader is a passionate and reckless young RAF pilot when in 1931, while showing off his talents in front of other pilots, he has a terrible accident which costs him both legs.

Determined and optimistic as he is, he makes the impossible possible and soon learns to walk on tin legs, without help or a crutch. Shortly after leaving the hospital, still on crutches during that time, he meets his future wife and love of his life Thelma.

The only bitter moment comes for him when they don’t accept him as a pilot anymore and he has to do desk duty.

If it wasn’t for WWII he may never have flown again but when war breaks out he undergoes tests and is judged fit for service.

The story which is already quite remarkable until that point, gets truly astonishing now. Not only does he fly one mission after the other, survives the Battle of Britain but he becomes one of the best-loved wing commanders until he is shot down in 1941.

He survives and is captured by the Germans. As a POW he shows the same determination as earlier in his life and escapes several times from different camps until he’s finally sent to Colditz castle where he remains until the end of the war.

Douglas Bader’s story is truly amazing. It would have been so easy to just fall into a deep depression and withdraw from life but Bader was a fighter and nothing, absolutely nothing, could put that man down or stop him. And he was a passionate pilot. As much as he loved his wife, we get the impression that he loved flying even more.

A story like this is quite inspiring but that wouldn’t make this a great movie. What makes it great is the way it is told. While the first half focusses on Bader, his accident and how he learned to walk again, the second half focusses on WWII, the Battle of Britain, the dog fights… It’s quite suspenseful and interesting. It’s not easy for Bader to be accepted at first. The young pilots are a bit taken aback when they find out their wing commander has no legs.

I wasn’t familiar with the main actors Kenneth Moore and the lovely Muriel Pavlow but they were both really good.

It’s certainly a movie I would recommend to anyone interested in WWII, the Battle of Britain and true stories about resilience and overcoming a tragedy.