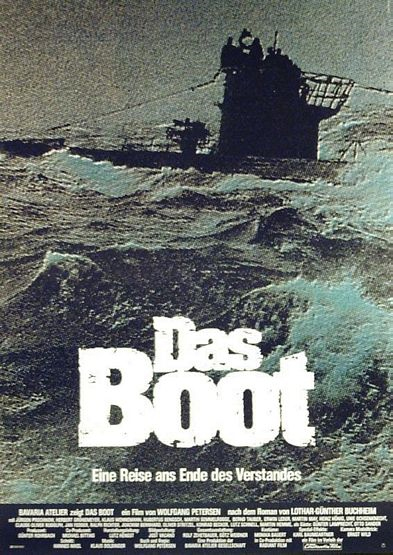 I love this movie. I can’t believe I didn’t rewatch it earlier. When I started this blog I wrote a Top 10 favourite war movies list and Wolfgang Petersen’s Das Boot was one of them. I’m glad to say that after rewatching it, it’s still among my Top 10, even among my Top 3. I don’t think war movies get any better than this. Or, I’d even say, movies don’t get any better than this. I’ve watched the longer TV version. I’ve not seen the Director’s Cut, so it’s hard to compare but I really love the slow build-up of this version.

Das Boot starts in 1941, in La Rochelle. We see a U-Boot crew leave the harbour. They are cheering, singing and looking forward to their mission. The crew members are mostly young, in their late teens and early twenties, only their captain is thirty years old. This time, they have a war correspondent on board, Lt Werner (played by German singer/songwriter Herbert Grönemeyer). He’s a lieutenant but inexperienced in combat, as it seems, and has never been on a U-Boot. We see a lot of the story through his eyes, and, as usual, when we have a young journalist/writer character like this among the crew, the movie is to some extent about the loss of innocence, the futility of war etc. But that’s the topic of many war movies, what makes Das Boot so outstanding is how carefully it’s been filmed, how accurate it is. After watching this, without ever having been on a U-Boot, you’ll have a good idea of how claustrophobic this must have been and of  how helpless the crew must have felt at times.

The first half of the TV series doesn’t do much more than introduce the characters and the daily activities on a U-Boot. Most of the characters are complex and likable and not exactly Nazis. The U-Boot gets in the line of fire of a destroyer but other than that it’s relatively quiet. The worst thing that happens is a three-week storm. And that is awful. Most of the time the U-Boot doesn’t dive and in a storm it’s even shaken more badly than many other ships. The captain lets them dive occasionally for an hour or two, just to give the men some rest.

The second part of the series, is much more action packed. They encounter destroyers and are shot at by planes. When they think they can finally return to La Rochelle after a few weeks, they are sent to Vigo in Spain, to resupply, and from there to Italy. The most exciting part is when they have to pass the straits of Gibraltar, get hit and sink rapidly. The fight for the boat and, ultimately, for their lives, is one of the most gripping scenes in war movie history. But as suspenseful as this is, there’s another scene I like even better. It takes place just before they leave Vigo. The captain and his officers are invited to dine with the officers stationed in Vigo. Spain is neutral territory and those stationed there have probably not seen any combat. They are well-groomed, well-fed and beyond clueless when it comes to the battle in the Atlantic or what the crew has gone through. Without ever being openly aggressive or rebellious, the crew sabotages the nice little dinner event by just being themselves— gruff looking, outspoken and past niceties. I loved how this showed the hypocrisy of those officers who were true to the regime but not willing to actually fight for their country.

Most of the action takes place inside but we occasionally see the U-Boot from outside, see how it silently glides through the waters, like a predator. Those shots are dark grey, almost like black and white shots, and I couldn’t help thinking of a wolf, before I remembered that the U-Boots were called grey wolves. Showing this like that is such a minimalistic approach but it works well. Even if you don’t know, your subconscious is going to register it. The music underlines the different elements and changes accordingly.

Sadistic officers abound in many war movies, luckily Das Boot is an exception. The movie gives us one of the strongest positive commanders I’ve ever seen in a war movie. I couldn’t think of a better actor than Jürgen Prochnow for this role.

According to a text following the opening credits, only 1 out of 4 U-Boot crew members survived, which means over 30,000 died. That’s a huge loss of lives. But not only are they in constant danger but they also have to put up with a lot of other dificult things: confinement, lack of space, air and fresh food. No wonder the men look far less cheerful and aged when they finally return to La Rochelle.

If you haven’t watched Das Boot yet, you should do so as soon as possible. It’s one of the very best (war) movies ever made.

For those interested: I’ve attached a music videos of Herbert Grönemeyer under the trailer. He happens to be one of my favourite German singers. His lyrics are simply brilliant.