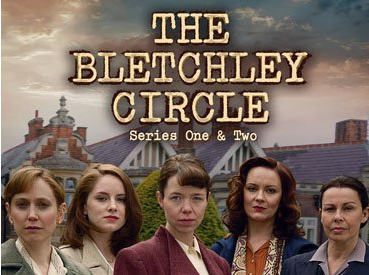 This post is meant to make you aware that while British TV Series The Bletchley Circle is well wort watching for its wonderful post WWII period feel, it’s not a war movie, nor has it anything to do with Bletchley Park per se. If you’re interested in a movie on the code breakers at Bletcheley, then you’d have to watch Enigma.

Still, there’s a link. The women in the series worked as code breakers during the war. In the series however they put their knowledge to a very different use and catch a serial killer.

I liked watching this because of the period feel. The crime story is OK, not that gripping in my opinion, but entertaining. The idea that you could break a serial killer’s crimes in applying the laws you used to break a code is quite fascinating though. What I didn’t know is that those who worked at Bletchley were not allowed to talk about it not even after the war.

It’s a very watchable series, just not set during WWII but many years later.