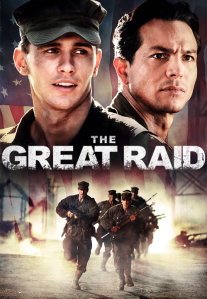 The Great Raid, starring James Franco, Benjamin Bratt, Joseph Fiennes and Connie Nielsen, tells the story of the raid at Cabanatuan, on the island of Luzon, Philippines, in January 1945. The story is based on a true story.

The movie begins with original footage and a voice telling us what had happened before. In 1944 when the US closed in on Japanese-occupied Philippines, there were 500 prisoners of war held at a POW camp at Cabanatuan. They were some of the survivors of the notorious Bataan Death March, in 1942. The Japanese made 80,000 American and Filipino prisoners of war after the Battle of Bataan. Forcing them to move, caused the death of over 10,000 people. The men died of abuse or because they were shot when they tried to escape.

Since the Japanese had the order to fight to the last and not leave any POWs behind, they killed many before the arrival of the US in 1944.

The movie follows three different plot lines. One line focusses on the men of the 6th Rangers Battalion, assisted by Filipino guerilla, who were assigned to free the soldiers held captive at Cabanatuan, the second line tells the story of the prisoners around major Briggs, and the third follows the Filipino resistance headed by nurse Margaret Utinsky.

The Filipino resistance’s main concern was to smuggle medicine to the men in the camp. Most of them had malaria or suffered from various injuries because they were beaten and tortured.

I wasn’t familiar with the story and I think it was well worth telling. It was the biggest US rescue mission ever and took great courage and careful planning, both of which are illustrated in the movie.

The camp scenes were not very original. They had a small-scale Bridge of the River Kwai feel but were, of course, not as good. I didn’t think Joseph Fiennes was the best choice for the major but that’s because I have a bit of a personal aversion. I find the way he plays often melodramatic. It certainly was in this movie.

The resistance scenes were quite typical as well. What made the movie worthwhile in spite of a lack of originality were the actors who played the soldiers of the 6th Rangers and the combination of the three plot lines.

There’s a love story between Margaret and Major Briggs but it’s not corny. It adds another dimension and since it’s supposedly a true story it’s rather tragic.

I wasn’t too keen on the music. It sounded very 40s and was used like in the 40s, meaning—never ending background music. At first I thought the movie was a remake, but I don’t think it was.

It’s a watchable movie but it’s not great. If it had been cut and condensed it would have been better. Nonetheless, thanks to the long intro and because it’s a true story, I found it interesting. I’m surprised that as many as 500 survived the three years of captivity under these conditions.

One last word: if you’re looking for a movie that paints a positive or balanced picture of the Japanese, this isn’t one of them. All the Japanese we see in this movie are cruel and violent.