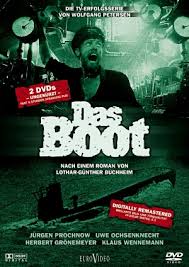 I’m always amazed about how different posters for the same movie can look, still I expected that there wouldn’t be so many different ones for Das Boot. I was quite wrong.

Which one do you prefer?

Starting just before the Battle of Britain The Way to the Stars tells the story of two friends and the people that surround them on a British airbase. Flight Lt. David Archdale (Michael Redgrave) and Pilot Officer Peter Penrose become friends when Penrose (John Mills) arrives at the base where Archdale is squadron leader in 1940.  The years go by. Penrose who was a total rookie at the beginning of the movie becomes a good pilot. Archdale gets married to the hotel manageress Toddy and they have a baby. Penrose falls in love with Iris who lives at the hotel with her very stern aunt.

In 1942, just before the Americans join the base, Archdale doesn’t return from a mission. Shortly before this he withdrew Penrose from flying duty as he had done far too many missions. He was now a controller which he hated. When his friend dies he becomes very bitter  and breaks up with Iris.

The arrival of the Americans in 1942 changes the tone of the movie. We could say that we become witnesses of a real culture clash. I think this is very well done and the movie manages to do both countries great justice. I enjoyed this a lot as it is so insightful and does poke fun at both.

One of the American pilots, the eponymous Johnny (Douglass Montgomery), plays an important role in the second half of the movie.  He is married but he likes Toddy a great deal, probably falls in love with her. This is not a clichéd story of an adultery but a nuanced  tale of two people who meet each other, feel very close and realize that under other circumstances they would have become lovers.

For the aviation buffs out there I have to say that we see no combat scenes but we benefit greatly from the time during which this movie was shot as you will hardly see so many original planes and different types of planes in any other movie (certainly not in anything modern). We get a particularly  good feel for the American Flying Fortress. An important part of the movie takes place in Toddy’s hotel which allows for some great character portraits. It is quite a motley crew that one would have encountered in a hotel during the war. Another interesting aspect.

In many ways this is a unique movie. Touching and quite accurate in the depiction of life on an airbase at the time. 4/5

Very obviously every country chooses to advertise movies in a different way. Same thing with books. I thought it might be interesting to pick a movie, Enemy at the Gates in this case, and just look what I come up with. It’s interesting, dont’ you think? I can’t quite figure out which is which, apart from the last one, of course, that is the French poster. Now in France they even chose another title. Stalingrad.

Which is the one that you prefer? Which one captures the story best? I think I would prefer the third one if it had been Ed Harris’ instead of  Joseph Fiennes’ face, although… I am not sure. 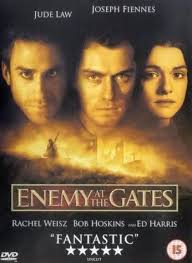 I have been looking at a lot of war movie posters and there are quite a few I like because of their esthetic qualities. But these were probably not necessarily the most successful ones. After awhile I realised that many of the best ones share a few common themes.

First we do see a juxtaposition of the individual and the collective or the personal and the impersonal. You often see a few faces of soldiers whose story is told in the movie, like on the Saving Private Ryan one and additionally you either see a row of dark silhouettes or one dark silhouette like in this case that stands for the whole body of soldiers. This juxtaposition is actually also the key to all successful war movies and not only to their posters. Take a historical event in which a great number of people is involved and then pick one person and tell his or her story. The fact that millions of Jews have been killed during WWII as horrible and tragic as this is doesn´t suffice to make us sympathize. But take Anne Franks destiny, think of Schindler´s List or The Pianist… That´s quite a different story. We identify and sympathize.

This is exactly what great war movie posters manage to symbolize. The anonymous mass versus the individual destiny.

Of course there are other ways to interpret these posters. Loneliness in the event of a tragedy. Comradeship… The figures seem small against the background, huddled against one another.