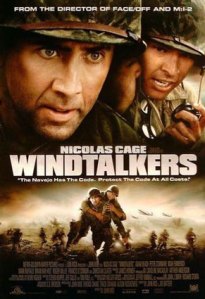 This is one of my worst war movie experiences and probably even one of the worst movies in general. Already under normal circumstances (meaning when he does some decent acting of which he is capable) I’m not really a Nicolas Cage fan but in this movie his acting is frankly ridiculous. This is a parody of suffering and you don’t believe one second that his character is in pain. Definitely not from shell shock. Maybe one would believe it if someone informed you he had a bad case of piles. I had been told that this is not a good movie, although it has his followers, but I didn’t imagine it could be this flawed. There’s bad acting, a lot of explosions that seem to happen for no reason and a stupid plot twist when the Indian code talker plays a Japanese and enters the Japanese  dugout with Nicolas Cage’s character in tow. Unconvincing? Embarrassing!

Enough slagging off. What is it about and why did I not listen to the ones who told me? Purely because I’m interested in the history of the North American Indians. Apparently they had successfully been used as code talkers during WWII. A valuable asset to the American Army. Codes and code breakers  are a vital element in any war (nicely shown in Enigma). Windtalkers tells the story of two Indian code talkers and their counterparts or body guards so to say during the battle of Saipan in the Pacific. But this is only what the Indians are told they are. On a deeper level those two men (one the insufferable Nicolas Cage and the other the convincing  – as always- Christian Slater) are not only guardians  but ultimately they could become executors. Since it would be fatal should the code get into the hands of the enemy,  the men must see that those Indians are not taken prisoners under any circumstances and are  killed in the event of  imminent capture.  This creates a lot of moral tensions. Would they really do it?

The only good bit was the rites you see the Indians perform. What a pity. Had John Woo  managed to tell us something like Glory does about the African-American soldiers’ participation in the Civil War… What a movie this would have been…well…he didn’t.