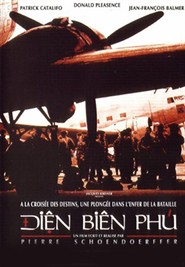 France, a country that has endured and fought many wars, was at the center of many a battle and armed conflict, a country famous for its outstanding filmmaking has produced a very modest amount of war movies. You will find numerous WWII movies on the Resistance and a fair amount of rather psychological war-time movies but if you are looking for combat movies, you will not be lucky. I know of no French air combat or submarine movie at all.

There may be many reasons and I can only attempt an interpretation, comparing French cinema in general to the cinema of other countries. What becomes apparent soon is that the French are not keen on producing large-scale, epic or very action driven cinema. French movies are psychological and intimate. They focus on the dynamics between a few people, their interaction, the dialogue. Many of the most famous French movies focus on tiny details, small things. It’s easily understood that this doesn’t fit in with infantry combat movies with their huge casts and more action driven story lines.

In choosing 12 movies  I tried to pick the few real combat movies I knew and added the ones that I think excellent or that absoultely need to be watched. I also tried to covera wide range. I left out good ones, I’m sure.

For those who want to further explore French cinema the website French War Movies offers a great overview.

I discovered one huge problem for the non-native speaker when I watched La Grande Illusion recently as I bought a movie with English subtitles. Almost 2/3 of the dialogue was missing. I noticed the same when I watched and reviewed the Italian Rome, Open City (here is my review). Since French and Italian movies are dialogue driven, it’s very hard for a non-native speaker to fully appreciate them. I’m sure this is done better in more recent movies, still it is a problem.

With all this said, let’s open the curtain for twelve stunning movies:

La Grande Illusion aka Grand Illusion (1937): WWI. Jean Renoir’s movie is one of the great classics of European cinema starring the late great Jean Gabin. A POW movie that offers a lot. Interesting German characters included. (Here is the review)

Hiroshima Mon Amour (1959): WWII. Another movie by Alain Resnais. A love story between a French woman and a Japanese man from Hiroshima. Interspersed with original footage of Hiroshima. Very special and poetic based on the scenario by Marguerite Duras. A must see for French cinema aficionados. (review upcoming)

L’armée des ombres aka The Army of Shadows (1969): WWII. Jean-Pierre Melville’s Resistance masterpiece. Another classic. Claustrophobic, impressive, sparse. Excellent actors. One of the most depressing movies I’ve ever seen. (Here is my review)

L’honneur d’un capitaine aka A Captain’s Honor (1982): Post war. Algeria. A captain who died on the battle field in Algeria is accused of having been a torturer and a murdered. His widow tries to prove that he wasn’t guilty. (review upcoming)

Dien Bien Phu (1992) : Indochina. Infantry Combat. Schoendoerffer’s movie shows the final defeat of the French in Indochina. Not nice to watch at all. (review upcoming)

Le pianiste aka The Pianist (2002): WWII. Holocaust. Tells the story of a Jewish pianist in the Warsaw ghetto. Harrowing and beautiful. My favourite Holocaust movie. Very moving. (review upcoming)

La chambre des officiers aka The Officer’s Ward (2001): WWI. Everything you never wanted to know about the horrible facial wounds that were so frequent during WWI. Made me quite sick. Painfully well-done  (Here is the review)

Un long dimanche de fiançailles aka A Very Long Engagement (2004): WWI. Based on Sébastien Japrisot’s eponymous novel it tells the harrowing story of young Mathilde who travels to the no man’s land of WWI in search of her lost fiancé.  This is one of the darling movies of international film critics. I did like it but wasn’t awed. Starring the much-loved Audrey Tautou. (review upcoming)

Joyeux Noël aka Merry Christmas (2005): WWI. The story of the little peace during the Great War. During the first Christmas in WWI, German, French and British/Scottish troops cease fire and play football together. Wonderful movie with great actors. One of  my Top 10 all-time favourites and one of the bestanti-war movies that exist. (Here is the review)

L’ennemi intime aka Intimate Enemies (2007): Algeria. One of the very few French Infantry Combat movies. Very good and very critical. About the ugly side of an ugly war that was officially no war. If you want to find out why I found this hard to watch, you’ll have to read the About page. (Here is the review)

L’armée du crime aka The Army of Crime (2009): WWII. French Resistance. Based on the true story of a group of young people and immigrants who fought a desperate fight against the Nazis. They were led by the poet Manouchian. This is an absolutely stunning and very tragic movie. One to watch and re-watch. It went directly on my Top 10. (Here is the review)