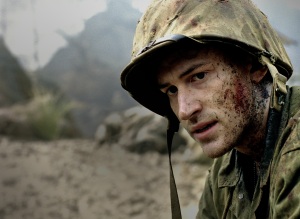 I finally got to watch the last episode of The Pacific. Even though I had an entry on it a while back I didn´t feel like writing about it before I had seen the whole series. It proved to be  a good decision since I couldn´t really appreciate it at first. I couldn´t help myself, like so many others, and compare it constantly to Band of Brothers. Apart from being a HBO miniseries produced by Spielberg and Tom Hanks, opening with men who were there talking about their experiences, those two series have nothing in common. Sure they both show a lot of very intense and gruesome infantry combat scenes but that is that.

Band of Brothers, as the title eloquently indicates, was about a close-knit group of men, one Army Infantry Company. This is not the case in The Pacific. The Pacific focuses on three main characters, the three marines Sgt. John Basilone, PFC Robert Leckie and Eugene B. Sledge. The last two wrote books about their experiences. The first episodes focus on Leckie, whereas the last ones tell Eugene aka Sledgehammer´s story. This last detail is based on the fact that Eugene went to war much later than the others. He missed Guadalcanal and Cape Gloucester, one main battle and one major experience of the war in the Pacific.

The mini series shows a lot of off the battle ground episodes. Soldiers on leave in Australia, Leckie´s stay at different hospitals and later we see Sledge back home. Many of this off the battleground parts look at the symptoms of post-traumatic stress of which both Leckie (in a very physical way-peeing himself-) and Sledge (more psychological-he´s depressed and has endless nightmares) suffer intensely.

The series has  many crucial moments. Truly gory battle scenes.  Endless rain on Cape Gloucester that grinds down the morale. The realization that all they learn is “killing Japs”.

There is one key scene, the moment when the two friends Sidney and Sledge meet as one leaves and the other arrives in the Pacific. Sledge wants to know from Sidney how it is to be fighting but he doesn´t get an answer. This is actually a recurring theme in war movies (there is a scene like that in The Deer Hunter and in many others): the inability of those who have experienced it to tell those who are about to experience it what it is like to be in combat. Or maybe it is not so much an inability as a refusal. They have been there, they know it´s no use. You cannot talk about something that is so completely different from anything you imagine. No one who hasn´t been there will ever know what it is like and there are no words to really convey this, nothing that equals the experience. All you have got in the face of the innocent and ignorant is silence. The Pacific shows this very well.

I would like  to point out specifically one further scene. It is related to one of my major points of interest namely Death. In The Pacific we see one of the most touching deaths in the history of war movies. I don´t want to spoil anything so I´m not going to tell you who is dying. What makes this scene so different is the way it is shown. We do not see the actual dying, we hear that the person died and then the corpse is being carried  by some soldiers and transported through the lines of men standing there paying tribute and crying. This is a genuinely heartfelt and sad moment. A display of utter futility.

Something else is very different from Band of Brothers. Even though it was WWII, this wasn´t the same war. This is not about a bunch of soldiers freeing occupied countries and captives. We have no rewarding moments like the one in Band of Brothers when they liberate people in a concentration camp. The war in the Pacific seems much more futile at moments. And senseless. And it lasted longer. The war in Europe was already over, Germany had surrendered but Japan had not. Only after Little Boy and Fat Man did this war stop. This must have been some sort of an anticlimax. By the time those soldiers came home, the whole world had already been celebrating the end of the war. The party was over and they had missed it.

Needless to say that this influences the tone of the movie.

For all these reasons I do not think it is doing The Pacific any justice to compare it to its older brother.  It really has its moments this series.

One last thing needs mentioning though and it is something I did not enjoy much. The Japanese are never ever shown in a positive light. You truly get the impression that they were a bunch of murderous automatons. If anyone wants to see a more honest depiction I suggest you watch Tora Tora Tora (1970) or Letters from Iwo Jima (2006). They both try to and  succeed in doing the Japanese justice. 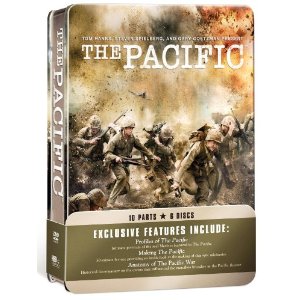 19 thoughts on “The Pacific versus Band of Brothers: Should we compare?”