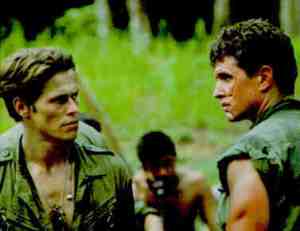 To determine who is your favourite war movie character is a very, very subjective thing. At least for me. No objectivity here. It is neither linked to the fact if I do consider the movie he´s in to be outstanding or average, it doesn´t say anything about the acting in itself, I really only think of the character. And, yeah well maybe it has something to do with the fact that the role is played by one of my favourite actors.

What I loved about this character is his goodness. In all the horror that surrounds him, he stays good. Nothing compromises him, nothing turns him into an inhuman being devoid of feelings or compassion. And in the end he doesn´t shy away from sacrificing himself. He is the ultimate war movie hero, hero through his sacrifice not through his killings.

And yes, I alluded to him in another post (Christ and the War Movie Hero). My favourite character is Sgt. Elias (Willem Dafoe) in Platoon. And yes, I´m sure it´s no coincidence that he was later chosen to play Jesus Christ in The Last Temptation of Christ. He´s been my favourite for many years now and I only wavered once, after having seen When Trumpets Fade where we see another sacrificial hero. 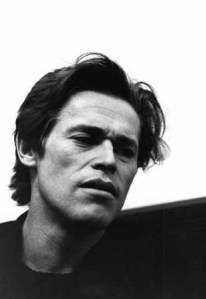 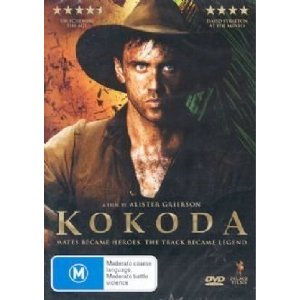 Kokoda 39th Battalion is an Australian movie by Alister Grierson and tells another story that took place in the Pacific during WWII. Only this time we don´t watch Americans fight for the Australians (as they do, amongst oher things, in the miniseries The Pacific), but the Australians themselves. The Kokoda trail on Papua New Guinea is the main trail that leads directly to Port Moresby. By means of this trail the Japanese were planning to arrive at Port Moresby and from there an invasion of Australia would have been easy.

Obviously the Australians did everything to prevent this. The 39th battalion who is in the center of this movie was essentially a battalion of untrained volunteers. The central story focuses on two brothers who joined this battalion together.

The opening of the movie shows us a sequence of still lives that are very beautiful. Pictures of fauna and flora of the island. After that we see what has to be interpreted as premonition like dream of  Jack, one of the two brothers. This is somewhat an exaggeration of what the terrain was like. Same as in episode 4 of The Pacific there is a constant rain, and the terrain gets muddier and muddier. Jack slips and is almost drowning in mud. In the end he looks like some almost amphibian prehistoric creature. Those first ten minutes make you believe you might watch a film like The Thin Red Line with a lot of flashback elements, daydreams but that is, as you soon realise, not the case. From that moment on Kokoda turns into Hamburger Hill, meaning heavy jungle infantry combat.

The men are surrounded by Japanese soldiers whose camouflage is so much more efficient than their own, whose fighting experience is outstanding, and whose cruelty, as the movie wants to make us believe, is beyond imagination.

This was one of the movies that made me think again and again: Why war? Why did that happen? Why did it have to happen. The efforts of the Australians seem so futile, that even though they won in the end, there is nothing noble in all this. It´s just horrible and hard to watch.

I first thought that this was an average movie but the overall atmosphere is so intense, the desperate fight of these badly trained men is so well depicted that I think it´s quite a good movie that I would recommend you´d watch. And, most important, the pictures of the dense forest and the instances of cruelty in the middle of the jungle aren´t easily forgotten and stay in your mind long after you´ve watched it.

Yes, it´s biased, the Japanese are shown as beastly monsters but still.

Furthermore it tells a quite soulful story of the deep bond between brothers.

This is such a gorgeous movie by Sally Potter,  starring Johnny Depp, Cate Blanchett, Christina Ricci and John Turturro.

Love story and survival story. Tale about friendship, ode to music. A very rich movie with beautiful pictures and an extraordinary soundtrack.

It reminds us that the jews were not the only ones who have  been persecuted and exterminated during WWII.

We tend to forget that the gypsies were also victims of the holocaust.

Apart from being one of the rare movies about cavalry combat this movie depicts a very interesting problem: The soldier who can´t kill. This is interesting in many ways. Sure it is commonly acknowledged that killing at war and killing in peace time is not the same. While one qualifies as simple killing, the other is said to be murder. You never hear anyone say about a soldier that he “murdered” enemies. He killed them. No judgement here, just a fact. Now what about the soldier himself? Is this really just “killing” for him, a justified way of taking someone else´s life? I don´t think so. Many soldiers suffer from nightmares when back from war and often, one of the elements they dream about, is the enemies they killed coming after them. Undoubtedly they feel guilty. Pacifists all over the planet will agree with them.

Dave in The Lighthorsmen is a good hunter in civil life. He knows how to handle a weapon, he is able to aim and shoot. But he is incapable of killing.

You don´t see that very often in war movies. 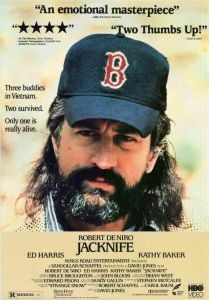 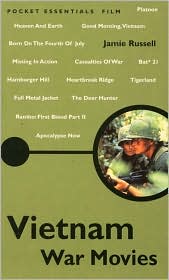 This useful little book is one of the pocketessential film series books.

The movies are ordered by themes:

Each movie is summarized, cast and crew are named, some background and sub-text information is given and the movie is rated as well. 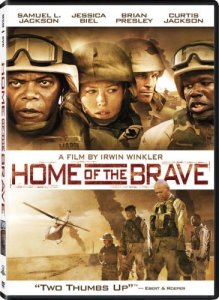 Home of the Brave is about a group of soldiers who came under heavy attack shortly before being sent home. After their return they try to cope with what they have been through. They all fail to some extent before they realise they need psychological help.

And yet, there are a lot of people who like this movie and say: that´s exactly how it was.

Fine. But DO NOT show a message like this in such a way. After a while you start to wonder, why there is not a constant voice in the off telling you: ha…that was impressive, ha…see how horrible, ha….start to blame the government and now ha….

This doesn´t work. It´s like someone telling you a joke and immediately explaining you afterwards why it was funny.

The opening is quite similar to many other opening scenes of movies located in Iraq, be it Battle for Haditha, Stop-Loss or any other. But the similarity is a purely exterior one. The acting is too bad to actually induce feeling. The convoy gets ambushed, people die and get mutilated. And all this happens after we have been told that exactly these people are about to go back home. This is repeated so many times that the thickest moviegoer starts to scratch his head thinking: Are they telling me something here? Fate playing tricks is an old theme in war movies, after all it´s one of life´s themes, but usually it is handled with more subtlety.

Next thing, they are all back home. One has lost his best friend, one (a doctor) had to amputate many limbs, one had her hand amputated and now they start to struggle and stumble and fail like the movie.

Sad. They meant well. They wanted to tell us: This should not happen. America shouldn´t meddle. This is not WWII. We won´t get statues and memorials and see people with tears in their eyes still thanking us years later. No, they hate us, they want us out and if we don´t get it, they shoot us up.

A few final words on the actors.

Samuel L. Jackson: He can’t really be very bad, can he? No, unless he unconvincingly tries to play a drunk. But he has his moments still.

Brian Presley: Who´s that geek? He´d be good in a movie like My Beautiful Laundrette. But only for the looks. Talentwise it´s rather… well…any bad series. Whatever.

Chad Michael Murray: How to get shot and look ridiculous at it. He should keep on making series like  One Tree Hill (not that I´d watch that) or movies like Cinderella Story.

50Cent:  Mumble, mumble, mumble or How do I act without having the tiniest facial muscle move.

Christina Ricci: What the heck were you thinking accepting this role?

The only good thing was the movie´s attempt at showing that medication is no solution to trauma and consequential sleeplessness. It´s in the end no better than drinking. You can´t ignore the trauma, you can´t block it, you have to accept it and  talk about it.

All About War Movies
Blog at WordPress.com.