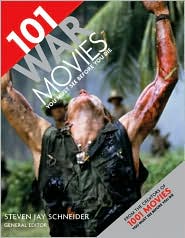 It’s ordered chronologically and contains colour photographs of the movie posters, naming of Cast & Crew, followed by a detailed description of the movie and some words on its importance. Additionally there is a colour photo of a scene depicting one or the other crucial moment of the movie with its description.

It is very nice to look at especially for those enthusiastic about movie posters. The entries are not very critical but this seems only normal since the aim was to choose 101 must-see  movies so one can safely assume the authors rated them all as outstanding.

From a purist’s point of view I think that the editors chose to include a lot of movies that are normally part of subgenres that the die-hard war movie fan would exclude. They therefore added  movies like Schindler’s List (1993) that you could rather call a wartime movie or Last of The Mohicans (1992)which is more of a War/Action Romance film.

Looking at their choices I think one of their main criteria was the esthetics of a movie and to a certain extent it’s blockbuster value, meaning how much of a story beyond the pure historical facts was told (totally contrary to Gary Freitas who would choose accuracy and history over story). This is why Platoon was included but neither Hamburger Hill (1987) nor 84 Charlie MoPic (1989) that are on many levels better.

Since I do not tend to be as strict as many, and would maybe even include Casablanca (1942) (which they didn’t include) I don’t mind their approach.

But what really does it for me are the pictures. I just love those posters. They are an art form in their own right.