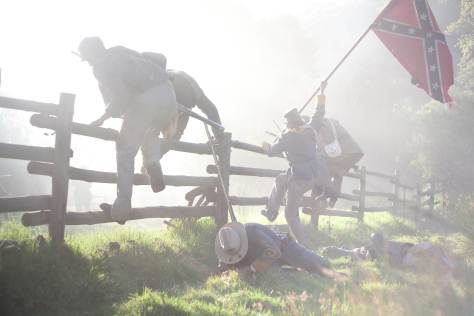 A couple of days ago I received an e-mail from History. com in which they asked me whether I would like to do a post on their upcoming Civil War documentary that will be aired on May 30th 2011.

As you can easily deduce, I was willing to do so as the program seems interesting and well done and I’m partial to Ridley Scott anyway, be it as producer or director. I will not have the opportunity to watch it as I’m not US-based but all of you who are, do not miss it.

Below is what has been written in the e-mail and should tell you all you need to know in advance.

At the bottom you can find a trailer. The trailer and the choice of music (I’m a HUGE Placebo fan and their cover of Kate Bush’s Running Up That Hill is a favourite) make me feel really sorry for not being able to see it.

Summary: Gettysburg is a 2-hour HISTORY special that kicks off a week of
History programming commemorating the 150’th anniversary of the Civil War.

Executive produced by Ridley and Tony Scott, this special strips away the
romanticized veneer of the Civil War. It presents the pivotal battle of
Gettysburg in a new light: as a visceral, terrifying and deeply personal
experience, fought by men with everything on the line. Compelling CGI  and
powerful action footage place viewers in the midst of the fighting,
delivering both an emotional cinematic experience and an information packed
look at the turning points, strategic decisions, technology and little known
facts surrounding the greatest engagement ever fought on American soil.

The special begins in the high stakes summer of 1863, as the Confederate
Army of Northern Virginia crosses into Pennsylvania.   Trailed by the
Union’s Army of the Potomac, Lee’s 75,000 strong army heads towards
Harrisburg, converging instead near a quiet farm town, Gettysburg.  Known
then only as a crossroads where ten roads running in all directions converge
like a wagon wheel, this small town would become site of an epic battle
between North and South.  For three days, each side fought there for their
vision of what America should be.

In collaboration with highly esteemed Civil War historians, HISTORY combed
through hundreds of individual accounts of the battle to find the unique
voices of struggle, defeat and triumph that tell the larger story of a
bitterly conflicted nation.