I hadn’t heard of it before and certainly wasn’t aware of such a lot of original footage in color. I only watched the beginning so far and can already tell it really gets to you so much more in color.

The documentary series Women, War & Peace looks decidedly interesting and all of the episodes can be watched in the US online here.

I haven’t had a chance to watch a lot of it as it isn’t accessible in my country but what I saw (trailer and teasers) looked very well done.

Here is the trailer

A couple of days ago I received an e-mail from History. com in which they asked me whether I would like to do a post on their upcoming Civil War documentary that will be aired on May 30th 2011.

As you can easily deduce, I was willing to do so as the program seems interesting and well done and I’m partial to Ridley Scott anyway, be it as producer or director. I will not have the opportunity to watch it as I’m not US-based but all of you who are, do not miss it.

Below is what has been written in the e-mail and should tell you all you need to know in advance.

At the bottom you can find a trailer. The trailer and the choice of music (I’m a HUGE Placebo fan and their cover of Kate Bush’s Running Up That Hill is a favourite) make me feel really sorry for not being able to see it.

Summary: Gettysburg is a 2-hour HISTORY special that kicks off a week of
History programming commemorating the 150’th anniversary of the Civil War.

Executive produced by Ridley and Tony Scott, this special strips away the
romanticized veneer of the Civil War. It presents the pivotal battle of
Gettysburg in a new light: as a visceral, terrifying and deeply personal
experience, fought by men with everything on the line. Compelling CGI  and
powerful action footage place viewers in the midst of the fighting,
delivering both an emotional cinematic experience and an information packed
look at the turning points, strategic decisions, technology and little known
facts surrounding the greatest engagement ever fought on American soil.

The special begins in the high stakes summer of 1863, as the Confederate
Army of Northern Virginia crosses into Pennsylvania.   Trailed by the
Union’s Army of the Potomac, Lee’s 75,000 strong army heads towards
Harrisburg, converging instead near a quiet farm town, Gettysburg.  Known
then only as a crossroads where ten roads running in all directions converge
like a wagon wheel, this small town would become site of an epic battle
between North and South.  For three days, each side fought there for their
vision of what America should be.

In collaboration with highly esteemed Civil War historians, HISTORY combed
through hundreds of individual accounts of the battle to find the unique
voices of struggle, defeat and triumph that tell the larger story of a
bitterly conflicted nation. 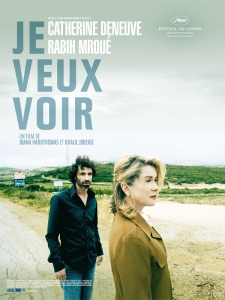 Je veux voir is something in between a documentary and a movie. The idea for the film  came from the helplessness of the filmmakers to see how parts of their country were destroyed in a war that lasted only 1 month. They wanted to have a look at the destruction. They wanted to see for themselves and let others see. To do so, they decided to have the icon of French cinema, Catherine Deneuve, and a famous Lebanese actor, Rabih Mroué,  visit Beirut and the South of Lebanon together.

Seeing those two strangers together in a car is quite awkward at first. He is afraid of what he will see. Rabih spent his childhood in the South where his grandmother lived. Now everything is destroyed but not all the destruction they see is new. A lot is still from the civil war. The Lebanese had never really had the time to fully rebuild their houses.

It is quite surreal at moments to see a woman like Catherine Deneuve in these places. They have odd conversations about putting on a seat belt or not, which is not important to Rabih. Not anymore, as he says. Since the war such details have lost their importance.

During their trip Rabih often repeats things Catherine says or once said in a movie in Arabic.

They have to be careful as there are cluster bombs everywhere and once they stray from the path, everybody is in uproar.

At one moment Israeli jets pass over their heads and Catherine Deneuve nearly freaks out. She thinks they are under attack. But no, as Rabih explains, this is a common procedure. Israeli jets often break the sound barrier to induce fear. But they also take pictures.

Frankly, as short as it is, I found it boring at times and Catherine Deneuve´s lack of comprehension was a bit exasperating.

But the end was good and I was glad I watched it.

We see mountains of rubble. Huge, huge mountains of rubble. All the leftovers of the destroyed buildings have been brought to a place near the sea, where they are further destroyed and the rubble is shoved into the see. What struck me were all this steel bits and wires looking out of those heaps like tentacles. You only see as much steel when concrete buildings have been destroyed. This clearly indicated that those buildings were not very old. And when I saw this I remembered that Beirut was once called the Paris of the Middle East because it was so elegant and stylish…

Those days are long gone.

Still the film ends on a positive note. The two strangers have become friends and the oh so impassive actress smiles one of her rare smiles when she sees Rabih again in the evening at a gala.

I am not much of a documentary buff but I will certainly watch this one as soon as I get a chance.

For those of you who live in New York or Los Angeles it will be aired as of this weekend.

Winner of the Sundance 2010 documentary award it is getting one good review after the other.

Check out the trailer and Restrepo´s Homepage.