Often when you expect nothing you’re in for a pleasant surprise. I’d read a few reviews that were critical of the 2005 miniseries Colditz and I expected it to be quite bad but must honestly say, I enjoyed it. Although, truth be told, for the wrong reasons. While the title may give the impression this is a POW series, that’s not the case, the POW part is only one story line. The other is clearly a romance. While the POW part didn’t work all that well, I liked the romance, or rather the tragedy.

At the beginning of the series we are introduced to the four main characters: Nicholas McGrade (Damian Lewis), Jack (Tom Hardy), his girlfriend Lizzie (Sophia Myles) and his friend Willis (Laurence Fox). Jack, Nicholas and Willis escape from a POW camp together. Willis and Jack are captured but Nicholas can make it to Switzerland. Before they are recaptured, Jack tells Nicholas to go and find Lizzie in London and tell her that he is alive. Jack is obsessed with Lizzie and the only thing he regrets is that he was too shy to ask her to marry him before he went to war.

While Nicholas is sent back to England, Jack and Willis are sent to Colditz castle which is said to be escape proof. Prisoners who frequently escaped from other prisons are brought to Colditz. In Colditz the two men meet the Canadian pilot Rhett Barker (Jason Priestley) who trades with different of the German guards. He will help them to escape, buying the silence of some of the guards.

Meanwhile Nicholas who has arrived in London has found Lizzie who is working as a nurse. He knew from Jack’s descriptions that she was a looker but he didn’t expect to fall for her. But he does.

The movie switches back and forth between the two settings. The prisoners make one attempt at escaping after the other and Nicholas tries to win Lizzie’s heart, only she loves Jack and wants to wait for him.

But then Nicholas has a shrewd plan how to win Lizzie despite her love for Jack. I can’t reveal more or it would be pointless to watch the movie.

I like Damian Lewis a lot and I think that’s to a large extent why I liked this series. But I also thought that Nicholas was a great, tragic character. He did a really bad thing and he paid for it but in a way, I think, most people can understand what he did and why he did it. I found it very touching.

The Colditz parts, as I said before, are much weaker. There are many reasons for that but one is certainly Jason Priestley. He’s just not a good actor. This is too bad because Tom Hardy and Laurence Fox are quite convincing.

Watch it if you’d like to see a tragic war romance, stay away if you want to see a movie focussing on Colditz only. Still, there is plenty of action and drama in the Colditz sequences too and interesting war related bits in the London parts. Overall it’s very watchable. Not everyone may like it as much as I did but I’m sure many will appreciate it. It is quite entertaining.

I’ve finally got a chance to watch the first few episodes of The US TV series Homeland.

Marine Sergeant Nicholas Brody (Damian Lewis) went missing in Iraq eight years ago, one of his friends who was there with him was found dead. His return causes quite a commotion. Not only among the public, journalists and the CIA but also in his family. He left a young wife and two small children behind when he went missing. His wife is having an affair with a friend and superior, the children are almost teenagers and estranged. And then there is Carrie Mathison (Claire Danes), an intense CIA officer who thinks that he has been turned by his captors and is plotting a terrorist attack on America.

Mathison made a lot of mistakes in the past and the CIA would like to get rid of her. Nobody believes her suspicions at first, she doesn’t get funding and decides to act on her own, breaking one federal law after the other, installing surveillance cameras in Brody’s home, following his each and every move, trying to catch him making contact.

The series kicks of well, it’s gripping and suspenseful, the premise, a US soldier who may only have survived captivity because he was turned, is interesting. Still, I had a few reservations. I wonder whether it is that realistic, to free someone from an eight year captivity and to push him right away to face journalists, politicians, CIA and the masses. The other problem I had, was the character Claire Danes played. She is driven and ambitious and a bit of a lunatic. On top of that she pops pills. We learn later that it is clonazepam – in other words a benzo – a heavy antipsychotic which is often used for unspecific or atypical psychosis. Hmmm…. Not sure what to think about that. Usually I have problems with the depiction of mental illness in movies and books. But I haven’t seen enough yet, so maybe they will get it right. It’s obvious that they want to make us doubt the character. It’s not an easy role, whether it will be believable in the end or not, and I think, Claire Danes does a great job.

Carrie is also tracking one of the most important terrorists, Abu Nazir. When she interrogates Brody she asks him whether he has met him during his captivity and he lies and says no.

As said, it starts quite good, quite intense but I couldn’t tell yet where it is going or whether I will really like it or not. But it’s certainly worth trying. 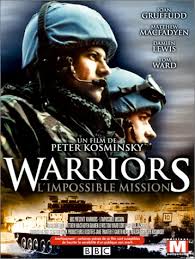