Often when you expect nothing you’re in for a pleasant surprise. I’d read a few reviews that were critical of the 2005 miniseries Colditz and I expected it to be quite bad but must honestly say, I enjoyed it. Although, truth be told, for the wrong reasons. While the title may give the impression this is a POW series, that’s not the case, the POW part is only one story line. The other is clearly a romance. While the POW part didn’t work all that well, I liked the romance, or rather the tragedy.

At the beginning of the series we are introduced to the four main characters: Nicholas McGrade (Damian Lewis), Jack (Tom Hardy), his girlfriend Lizzie (Sophia Myles) and his friend Willis (Laurence Fox). Jack, Nicholas and Willis escape from a POW camp together. Willis and Jack are captured but Nicholas can make it to Switzerland. Before they are recaptured, Jack tells Nicholas to go and find Lizzie in London and tell her that he is alive. Jack is obsessed with Lizzie and the only thing he regrets is that he was too shy to ask her to marry him before he went to war.

While Nicholas is sent back to England, Jack and Willis are sent to Colditz castle which is said to be escape proof. Prisoners who frequently escaped from other prisons are brought to Colditz. In Colditz the two men meet the Canadian pilot Rhett Barker (Jason Priestley) who trades with different of the German guards. He will help them to escape, buying the silence of some of the guards.

Meanwhile Nicholas who has arrived in London has found Lizzie who is working as a nurse. He knew from Jack’s descriptions that she was a looker but he didn’t expect to fall for her. But he does.

The movie switches back and forth between the two settings. The prisoners make one attempt at escaping after the other and Nicholas tries to win Lizzie’s heart, only she loves Jack and wants to wait for him.

But then Nicholas has a shrewd plan how to win Lizzie despite her love for Jack. I can’t reveal more or it would be pointless to watch the movie.

I like Damian Lewis a lot and I think that’s to a large extent why I liked this series. But I also thought that Nicholas was a great, tragic character. He did a really bad thing and he paid for it but in a way, I think, most people can understand what he did and why he did it. I found it very touching.

The Colditz parts, as I said before, are much weaker. There are many reasons for that but one is certainly Jason Priestley. He’s just not a good actor. This is too bad because Tom Hardy and Laurence Fox are quite convincing.

Watch it if you’d like to see a tragic war romance, stay away if you want to see a movie focussing on Colditz only. Still, there is plenty of action and drama in the Colditz sequences too and interesting war related bits in the London parts. Overall it’s very watchable. Not everyone may like it as much as I did but I’m sure many will appreciate it. It is quite entertaining. 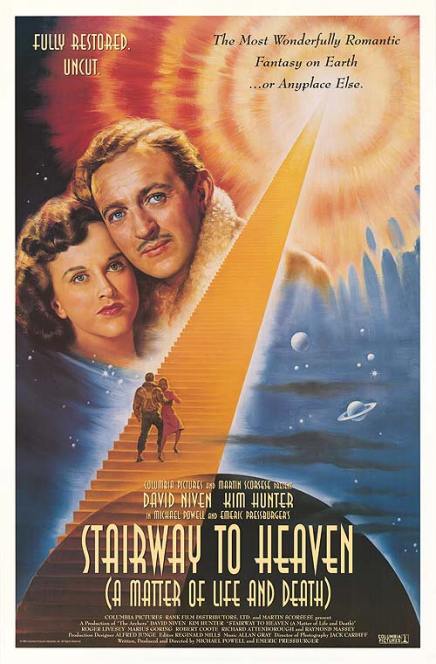 After having watched and loved The Archers’ (Michael Powell and Emeric Pressburger) The Life and Death of Colonel Blimp, I decided that I will watch all of their movies sooner or later. I’m not sure I would have taken the same decision if I had seen A Matter of Life and Death aka Stairway to Heaven (the US title) first. It was too… Hmmm… Not sure what word I’m looking for here. It seems it is on position 20 of the BFI’s Top 100 list (yes, another list but one I like). Surprising.

The story is pretty simple. The RAF pilot and squadron leader Peter Carter (David Niven) tries to fly back to England in a burning Lancaster bomber. His crew has bailed out, one of his men is lying dead in the aircraft. Before deciding that he will bail out as well, despite the fact that he has no parachute, he manages to contact June (Kim Hunter), an American radio operator, based in England. They talk for a while and immediately feel a very strong connection.

Lucky for Carter, his Other World guide misses him in the thick English fog and instead of being guided to heaven, Carter wakes up on a beach. He thinks at first he’s dead but then realizes that he has somehow survived and only minutes later he sees a girl on a bicycle riding along the beach. He runs after her and – what a coincidence – finds out it’s June. When it dawns on them that they had been speaking to each other just a while ago and that he should actually be dead, they fall in love immediately.

Although Carter seems unharmed, he has hallucinations in which he meets his guide who wants him to come to heaven with him. Carter refuses and wants to appeal before the superior court in heaven in order to be granted to stay alive. While Carter thinks he is visited by someone from the other world, June asks a friend, Doctor Reeves (Robert Livesey), for help. Reeves thinks that Carter suffers from a rare condition and needs surgery.

I couldn’t help but laugh out loud when our two main characters fall in love so speedily and call each other “darling” only moments after having met. Still, it’s an amusing movie but the appeal for me was not in the story.

What was also interesting is the American-British theme. We all know that the British called the American soldiers “overpaid, oversexed and over here” and there was a lot of resentment going hand in hand with this expression. The Americans joined the war late and were fresh and crispy and had a lot of money and managed to seduce quite a lot of British girls, while the Brits had already fought for several years, were tired and worn out. The movie tried to reverse this in choosing to depict an American girl falling in love with a British officer. The heavenly court also plays heavily on this theme.

There is one sequence which is quite funny. The first heavenly jury has to be dismissed as the members are all from countries which had been wronged by the British at some point during history. The prosecutor is an American as well, Abraham Farlan, the first victim of the American Revolutionary war.

If you are a fan of The Archers or interested in British cinema and cinema of the 40s, don’t miss it. I think it’s interesting from the point of view of cinema history and amusing enough but I can’t say it was my cup of tea. As far as war romances go, I’ve seen movies I liked much more.

I couldn’t find  a trailer but you can watch the whole movie on YouTube. Here is Part I

This is just a very quick post, an update really. I watched Part II of Birdsong, the BBC One TV drama based on Sebastian Faulk’s novel, on the weekend.

Here is what I wrote at the end of post I.

I didn’t mind watching it, I even liked it, but it isn’t great, it’s just very watchable. I’ll tell you my final impressions once I have watched part II.

Well, here are my final impressions. While part one was heavy on the romance element of the story, part two is much more about the war. The story is still told alternating flashbacks and episodes in 1919. Stephen has been at war for the whole duration of the war. Part II managed to change my view of the whole series completely and I have to say, I liked it a lot. I even thought that Eddie Redmayne was after all the perfect choice for this role of a heartbroken man trying to survive the horrors of the trenches.

Don’t miss it if you get the chance to watch it.

I finally managed to watch Part I of Birdsong, the BBC One TV drama based on Sebastian Faulk’s excellent eponymous novel. They chose to tell the story moving back and forth between 1910 and 1916.

Stephen is fighting in the trenches and thinking back on how he meet Isabelle, in France, in 1910. He stayed at her house and helped her husband, a factory owner, develop new machines. Those machines were going to make a lot of the workers lose their jobs.  The marriage is an odd one. The children are from a former wife, Isabelle and her husband have no children together. At night Stephen hears her cry, during the day he watches her sneak around. She tells him later that she brings bread to the worker’s families.

Isabelle is clearly what the French call a “mal-mariée” – a woman unhappy in her marriage. Stephen is much younger than her husband. He is kind, caring and very attentive. We can’t blame her for falling in love.

All this is shown in flashbacks while Stephen is fighting in the trenches. He is a Lieutenant and has the reputation of being very quiet and superstitious. He seems to have no family, friends or a sweetheart. The trench they are in is above a tunnel system dug out to lead under the German trenches where they could be blown up. The diggers hear that the Germans are digging on the other side as well and are quickly approaching. Usually miners were sent down, not infantry men, but the commanding officer decides that Stephen and his men have to go down as well. Stephen had a problem with one of the miners before and now he is sent down with him.

I’m looking forward to part II as I have forgotten the rest of the story. Or at least the rest of the love story. When I read the book I was much more impressed with the parts on WWI. Although the movie starts in the trenches, it still is much more of a love than a war movie and can’t even be called a war romance as I would only call a movie “war romance” when the romance is set during the war.

I didn’t mind watching it, I even liked it, but it isn’t great, it’s just very watchable. I’ll tell you my final impressions once I have watched part II.