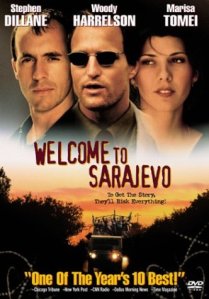 I´m not normally sitting there watching a movie and asking myself constantly: What would I have done but I did while watching this film. Michael Winterbottom´s movie Welcome to Sarajevo is one of the very highly acclaimed war movies. It is based on a true story, Michael Henderson´s account of his stay as a war reporter in Sarajevo. Sure, war and journalism is a theme that is likely to be explored and Winterbottom is of course not the only filmmaker to have done so (The Killing Fields, We Were Soldiers, Full Metal Jacket, Generation Kill, Das Boot to name but a few,  deal with it to some extent). His second theme, war and children, has also been the center of many movies (Hope and Glory, Empire of the Sun,  La vita è bella aka Life is beautiful ). His major theme however is involvement. How much should we get involved? And in this specific context: Can a reporter only watch and stay outside?

Still somehow I didn´t like this much praised work and was glad when reading a comment on imbd from a person who lived through the siege of Sarajevo that he did not really like it since he found the setting unrealistic or rather the filmmakers had taken too many liberties with the setting. Funny enough that is exactly what I sensed and it spoiled a lot for me.

Winterbottom filmed shortly after the war, on site. We see a lot of destroyed buildings.  So much destruction is utterly depressing. Journalists live in abandoned hotels, meet in the evening in bars and discuss the days events and filming. Some pictures are really awful and the journalists  voyeuristic approaching of wounded, dead and dying people is shown in all its tastelessness. Intrusion without involvement.

The British reporter Michael Henderson (Stephane Dillane convincingly disenchanted and thoughtful) and the American Flynn (Woody Harrelson a bit of a sicko role as usual) were two of those vulture like creatures running to every scene whenever they heard a gunshot, firing, a bomb or screams. While Flynn appreciates the adventure quality of it all, Michael gets more and more weary. When they discover an orphanage that is located in one of the most dangerous zones of the city and he realises, even when he films the most realistic documentaries, the world just doesn´t give a damn, he´s had it. All through the movie we see original footage of the world´s then presidents. What they say combined with what we see would make great material for war satire.

Seeing those children, little babies, abandoned toddlers and older children Michael knows he can´t stay out of all of this. He wants to help and he does help. The journey he undertakes together with an American aid worker (Marisa Tomei – she´s such an endearing actress too bad her role is much too short) is the best part of the movie. Together with a few children and especially one girl whom Michael has promised a better life in England the escape the besieged city and try to get to Italy or England respectively. It´s an extremely dangerous and hazardous journey and you wish the whole time that they will make it. People like Michael truly make a difference.

Oh, by the way, what would you have done?