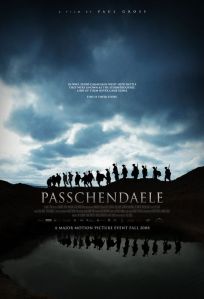 I was  tempted to write: “Once we had Pearl Harbor now we have Passchendaele” and leave it at that. But that won´t do. I´m afraid I must say, that this would have been an easy escape in terms of criticism for Passchendaele. And extremely unfair to Pearl Harbor. This coming from someone who thinks that Pearl Harbor does not even deserve the label “war movie”.

The story in a few words: As the war went on Canadians were getting more and more involved. Being only a little nation at the time, the participation of 600000 was enormous. 1 out of 10 did not come back. At Passchendaele alone 4 000 Canadians died and 12 000 were wounded. This unspeakable tragedy is meant to be shown. To illustrate this we see the exemplary story of one Sgt. who comes back after having fought at Ypern, on Vimy ridge etc. He’s a decorated war hero but shell-shocked. He has done something unspeakable and cannot forgive himself (apparently this bit is taken from Paul Gross´grandfather´s story of his participation in WWI). He is really bad off and won´t have to return. But, as some sort of love sacrifice (not going into details here I leave all the enjoyment of watching this movie and discover a piece of subtle sophisticated filmmaking to you. YES… I´m being sarcastic.), he goes back and ends up fighting at Passchendaele. This is one of the biggest and most notorious battles off WWI. Initially a success for the Canadians and their allies, in the end a failure due to the fact that a few months later Passchendaele was lost again to the Germans.

Watching Passchendaele I was feeling extremely stupid. Why did it escape my attention that this was again a hero + nurse + absurd conflict romance disguised as war movie? Unfortunately the romance part is nowhere near as good as the one from Pearl Harbor (Yes, I think Pearl Harbor is a very entertaining romance, well done). And the war parts? They are odd to say the least. We do see quite a bit of fighting. Between town ruins and in moors and muddy trenches. The odd bits reminded me of  Windtalkers (so watch out all you who liked Windtalkers). Many explosions, one unconvincing “in the trench of the enemy scene” plus, this was quite original, people keep on flying like puppets. Oh and… I almost forgot this…the way the Canadians are depicted is priceless. What a jolly crowd. Jolly, jolly, jolly. They never stop laughing not even when they are torn apart or their comrades come flying over their heads. Why? What in the name of everything does this mean? One last word: the conversations are among the worst ever heard. In the trench Sgt Dunne actually says to his lover´s young brother, explaining the war : “Forests burn cos they have to, oceans go up and down cos they have to…and I don´t think we are that different…(…) this is something we do cos we are good at it…” Forests burn cos they have to, eh? The inherent nature of the forest is to burn? Very deep. Abysmal.

You know what? Even though many Canadians appreciated this movie (probably purely because at last their heroic participation was brought to our awareness. NO. I´m not being sarcastic now.). … I think they would have deserved better. To be really blunt: I think this movie is shit.

Be it as it may, there is one good bit related to the death of the nurse´s father – no I won´t tell what it is – and I am sure: this movie has and will have its fans.

If I had watched the trailer before buying the DVD I would at least have known about the romance bit. Can´t judge a film by its cover, can we ? (Liked this one too much for my own good).