In the last years Germany has made quite a few very good war movies but there are also some older ones that have stood the test of time. I am sure I have forgotten some and left out many that are co-productions with the exception of Joyeux Noël aka Merry Christmas because it is one of my Top 10. I will very probably mention it again when I will make a post on 10 French war movies you must see before you die.

Let´s stick to Germany for the time being.

Die Brücke aka The Bridge (1959): WWII, Germany. One of the best anti-war films ever. Shows how senseless some orders are. Young people fight for a bridge although the war can´t be won anymore. It is one of the movies on my list Children in War Movies.

Hunde, wollt ihr ewig leben aka Dogs, do you want to live forever – Stalingrad (1959): WWII, Russia. A German classic. A grim look at the battle in Stalingrad.

Das Boot (1981): THE U-Boot movie. Conveys brilliantly what it is like to be helpless under water. Claustrophobic feel. Superb acting. Marvellous cast. Especially noteworthy the singer Herbert Grönemeyer.

Stalingrad (1993): WWII, grim infantry combat. German POV. One of the best war movies  ever, one of my Top 10 as well. The setting, the character portraits, the acting, the combat, the snow, the cold, the despair. A fabulous movie that gives an insight in one of the worst chapters of WWII. Another marvellous cast. Thomas Kretschmann (King Kong, Resident Evil, The Downfall, The Young Victoria) is in it. He is one of those German actors that are known far beyond Germany and Europe. (see my post on Stalingrad)

NaPolA aka Before the Fall (2004): WWII, Germany. Interesting look at the Hitler Youth. How they recruited their elite, how they brainwashed them. Poisonous Pedagogy. See my review for more details. This movie is also on the Children in War Movies list.

Der Untergang aka The Downfall (2004): WWII, Berlin. The final days of Hitler. Astonishing acting from the very great Bruno Ganz. A fascinating portrait. Eerie. Creepy.  An outstanding movie and a must see even for those who don’t watch war movies. (see my post on The Downfall)

Joyeux Noël aka Merry Christmas (2005): WWI, France. Especially noteworthy as it is about WWI. The movie depicts the so-called “Little peace”. It is Christmas and something strange is happening. The war stands still. The enemy soldiers prefer football over fighting and get to know and like each other. Based on a true story. You get a good feel for the differences of the trenches and the characteristics of the parties involved.

Sophie Scholl – Die letzten Tage aka Sophie Scholl (2005): WWII, Germany. German Resistance. One of the leaders of The White Rose, Sophie Scholl´s final days. I have hardly ever seen a movie like this. After watching it I did solemnly swear to become a better person (I am not too successful yet. It is an ongoing process. A work in progress). No, honestly, this woman or girl´s guts… So much selfless idealism and courage. I was awed.

Anonyma – Eine Frau n Berlin aka Anonyma – The Downfall of Berlin (2008) : WWII, Berlin. One of the movies I reviewed recently. I included it as it tackles a lesser known and very painful subject. The mass rape of German women by the Red Army. See my post of Anonyma.

Any movies you would add?

As I think Sophie Scholl is not known enough I added the trailer for you. 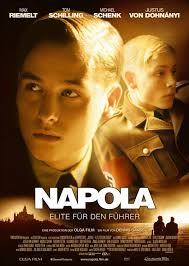 In this post I would like to focus on war  movies in which children have leading roles and are not just supporting actors like in The Hurt Locker to name but one example.

There are many movies whose sole focus are children. They come from different countries, show different conflicts and times but they have one thing in common: they are all good, very good or outstanding. This is quite remarkable. It is as if those film directors who aim for entertainment only would shy away from showing children in war movies. All the movies listed below are very different in tone. Some are light and almost playful, like Hope and Glory, some are depressing and raw like Come and See, others have the quality of a fairytale like Pan´s Labyrinth.

I am sure my list is not exhaustive. If you know of any others, let me know. I will try and review most of them in later posts,  like I already did with Hope and Glory (see post), Welcome to Sarajevo (link to post), The Children of Huang Shi (see post) and Savior (see post). I am stating the name and the year and country in brackets. The conflict and where the war takes place follow behind. I did include a few movies with teenagers in it like The Bridge or Napola, but most of the others focus on much smaller children. I did also  include Savior as the newborn is central to the story.

I am sure you will discover many you did not know yet as I did.

Before the Fall aka Napola (2004, Germany): WWII, Germany (see my review of NaPola)

Winter in Wartime aka Oorlogswinter (2008, Netherlans, Belgium): WWII, occupied Hollad in Winter, 1945 (here is the link to my post)

The Fortress of War aka Brestskaya krepost (2010, Russia): WWII, Russia 1941. Germans attack the Brest Fortress (here is the link to my post).